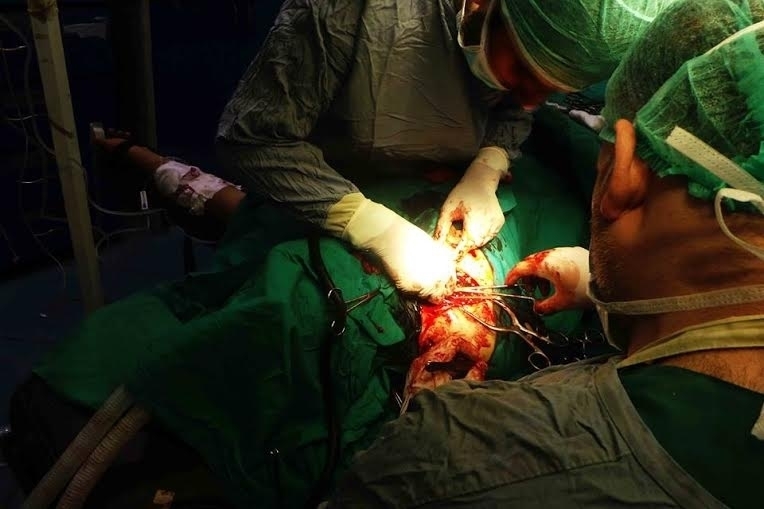 Seifeddin (Yahia Abdulbari), the first media spokesperson in Rif Dimashq, is the doctor who stays resilient while working silently in his poor hospital despite of destructions around him and the siege. His speech is colored with blood and is the remaining hope.

At the start of the revolution, Seifeddin was about to graduate from the Medical School at an Eastern Europe University. He was following the revolution from there when he turned his social blog to a platform through which he shared the information he received from his brother and friends back home. He coordinated demonstration with them and in turn sent the photos and news to media outlets, communicated with them to convey how people in his town got involved in the revolution and how the regime brutally treated them. He received his graduation certificate from his European University where he could easily start specializing. However, he turned his back to all of that and decided to return to “get back his soul, rights and humanity”.

The hard journey started on the soil of his city “Douma”, the center of the eastern part of Rif Dimashq Governorate. We had a special interview with Seifeddin (Yahia Abdulbari), the first media spokesman in Rif Dimashq. He spoke about the stages of the revolution, the changes, and his role in the media. He was the first person to dare to talk to the media from Douma. Then he stopped completely despite his big success in order to perform another important role, the role of a doctor who works in silent.

What are the human characteristics of the scene?  Whenever Seif has time to rest, he returns to his cold dim house after dedicating most of his time to the wounded people shot or bombarded by Alassad’s forces. He finds his house empty as he left it apart from the noise of bombardment and bombs.  All his family’s members have left apart from him and his brother who still take photos and documents what is happening in the city. They are both facing this hard historical test. He is exhausted and confused, as he sits in the basement of his house, bearing on his shoulders the burden of the pain of his patients where life has another meaning with the lack of medication and death due to bombing and the siege. For him, life is about a wounded man he cannot treat because there are no longer any materials or about a shattered body of a victim mourned by his/her family and the tears of a shocked child who does not understand how death takes away in a second his father, mother and all beloved people.

Seif starts his laptop, charged by a generator from the field hospital, as the city has no power since 13 months ago after Alassad’s regime cut off the power and bombarded all generators that provide Rif Dimashq, especially the Eastern Ghouta. He shows the photo of his daughter to look at her eyes as he did not see her yet. The photo was sent to him by his wife who is a refugee now and miles away from him. The regime has prevented her from coming home and it besieged her city and built military barriers that arrest people based on their ethnicity. He looks into the eyes of his ten-month old daughter, Lana, to have some hope. Lana, who was born away from, gives him the hope that connects him strongly to life.

Thousands of injured people will remember him as he was bandaged their wounds after surgeries all the time whenever it’s needed, “time has no regulations for him anymore” says Seif, as the surgery room is lightened all the time and the bombing is still shattering humans. As a media spokesman, Seif speaks and recalls how the revolution in Syria was people’s voice and humans’ call for freedom. Freedom was the spark, flame and the goal of the revolution; that’s exactly what pushed him to come back from where he was to contribute in “that human historical carnival” as he describes it and to serves the revolution. It was very important that the rebels, especially on the first few months, to find a rostrum to speak to the world from, so Seif chose to be that voice when many others retreated.

“I’ve changed my voice, but have changed information I was delivering” Saif says. He and other fellows established a media tribune for the revolution in his city called “coordination of Duma city for the Syrian revolution” and it has been a fact that being exposed as an activist is a disaster for him and his family, so Seif took all the possible precautions including changing his voice by using fabric blocks and masks while using Thuraya satellite phone when communicating with the media, using a fake name and even hiding the whole thing from his family, friends and some of his coworkers at the coordination.

He hid the Thuraya in the ground fearing the troops several intrusions. Whereas he was following the news with the help of friends and other activist and then publishing it to the media by his voice until he became the voice and the talk of the city. The media spokesmen were treated as traitors and spies by the regime and executed immediately if they got caught. The regime also tried to monitor every action they made, their phones and strictly banned even holding cameras. That’s what the regime did for Seif’s friend “Ghaiath Matar” who was executed by the regime after being arrested, tortured and throat removed. The same thing was repeated and many other media field workers were killed. This kind of people was and still the biggest fear of the regime because they would clearly expose its unlimited brutality towards the people.