As head of one of the largest Assyrian political organisations, he has taken an active part in the Syrian revolution 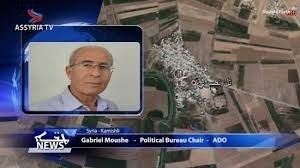 The State Security Branch of the Syrian city of Qamishli arbitrarily detained Gabriel Moshe Kourieh, head of the political bureau of the Assyrian Democratic Organization in Syria on 19 December, 2013. Known as one of the most popular Syrian opposition moderate, civil and peaceful activists, Kourieh's arrest prompted a popular and political outcry.

Kourieh served as head of the political office of the Assyrian Organization, the highest organizational and political position in the party, formed in September 2009. He has been an active participant in the Syrian revolution as a leader with the Damascus Declaration for Democratic National Change, which was initially considered the only political interface that represented protesters.


Kourieh hails from the city of Qamishli, in the far northeast of Syria. He was born in a Christian-Assyrian family in 1962, and completed his study in Qamishli before graduating from the Faculty of Agriculture at the University of Aleppo in 1986.

In college, Kourieh discovered the Assyrian Democratic Organization, quickly joining and becoming an active member. The organization was founded by early Syriac nationalists, under the leadership of Shukri Jarmokly, and continued to work secretly during the beginning of the union between Syria and Egypt in 1958, when all civil organizations and foundations were being shut down. The Rafidain Club was the most important of these.

Kourieh tells those close to him that the most influential event in his life was a visit that he made to the detained leaders of the Assyrian Democratic Organization at the Faifaa security branch in 1997. The leaders detained were Aziz Ahi, Karim Issa, and Bashir Isaac Saade, who had been arrested after the organization objected to the government policy on the Khabor River, which dried the river and deeply affected the adjacent Assyrian and Syriac villages. Kourieh was shocked by the level of psychological and physical suffering that his friends suffered during their arrest, despite the fact that one of them – Bashir Saade – being a former member of parliament.

Kourieh continued his activities in all organizational positions of the party, until he was elected as head of the political office of the Assyrian Democratic Organization during the fifth party congress.

Kourieh's Role in the Assyrian Organization

Kourieh believed that the issue of national rights could not be achieved by forging alliances with only similar Assyrian parties, but through the evolution of the entire Syrian democracy. That, he believed, could only be found in Damascus.

Kourieh had a prominent role in creating common spaces with other Syrian opposition forces, culminating in his joining of the Damascus Declaration for Democratic Change, just a few months after it was founded in 2006.

This change did not mean that Kourieh opposed communicating and coordinating with other Assyrian national organizations inside Syria and abroad. He was the representative of the ADO at the General Conference of the Assyrian Chaldean Syriac in Baghdad in 2003.

The other change Kourieh brought about was an improvement in communications with Kurdish organizations in the northeast of the country, especially after the Kurdish uprising in the Spring of 2004.

Kourieh believed that the goals and demands of the Kurdish national movement were in line with those of the ADO, because they demanded the recognition of ethnic diversity inside Syria –  something that would be an asset to the Assyrian organization and Assyrian rights in the country.

Kourieh and the Syrian Revolution

When the Syrian uprising began in the Spring of 2011, Kourieh was occupying a leading position in the Damascus Declaration. He was a key initiator in the marathon dialogues and negotiations between all political forces of the Syrian opposition to remain faithful to the political expression of the people’s uprising.

Kourieh's leadership in Damascus Declaration had two results. On one hand, his presence as a Christian personality and a representative of the Syriac national organization refuted regime accusations of sectarianism against the revolution and its leaders. On the other hand, Kourieh was keen to make sure his party fully and effectively participated in the demonstrations, so as not to be dragged into the regime policy of presenting the revolution as an uprising of the Sunni majority against the minorities in Syria.

This set Kourieh apart from the leadership of other Syrian organizations. Kourieh reinforced his stance when he refused to leave the Damascus Declaration to join the National Coordination Body, which was less radical in its opposition to the regime.

Personally, Kourieh is a highly cultured individual. He is a regular reader of literature and political publications, a cinema-goer, and a sports follower. He is also vocally cautious about the migration of Syrian Christian population outside Syria. He has insisted on staying with his family in his hometown, despite direct threats from those affiliated to the regime in his home city.

On Christmas morning, just six days after Kourieh's arrest, friends visited his family to comfort them. They were surprised by all the Christmas festivities in the house. The family said that Kourieh was a prisoner of conscience, and that this did not bring sadness. He is no different from the hundreds of thousands of other Syrian victims, they said.