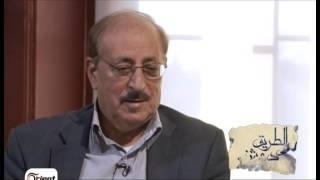 Hussein al-Ammash had no remarkable presence in Syrian economic and political life. He studied and worked outside the country until the beginning of the third millennium in 2002 when he was appointed as a chairman of the Fighting Unemployment Commission. In 2005, Ammash emerged as a savior of the unemployed and a fighter of corruption in the Syrian government, which led to his expulsion from the position. But Ammash then entered a new phase in which he communicated with the opposition and was arrested… So who is Hussein al-Ammash?

Hussein al-Ammash was born in al-Bukamal, Deir az-Zor in 1950. Ammash got a bachelors degree from Aleppo University in 1974, then a Master’s degree from Monmouth University, New Jersey, and finally a PhD from the University of Pennsylvania in 1985. Ammash started his economic research with the Kuwaiti Ministry of Planning from 1974 to 1977, where he was responsible for studying the projects of the first Five-Year Plan.

Ammash then moved on to work for the Arab Fund for Economic and Social Development in Kuwait as an economic expert between 1985 and 2001. Afterwards, Ammash became the economic adviser for the Fund to deal with Arab governments in the design and execution of more than 20 Arab and regional public sector development projects. The value of each project was between 30-500 million dollars. In addition to this job, Ammash was assigned to evaluate and study the feasibility of economic and development projects in some Arab countries—one of these projects was the establishment of the Fighting Unemployment Commission in Syria— to analyze and evaluate governmental budgets, prepare the technical assessment for projects, and coordinate conferences and seminars.

The prime minister's individual decision to expel Ammash from governmental work caused a lot of controversy in the Syrian economic and political medium, as it was made for personal purposes. As soon as Ammash criticized the ministerial mechanism of work in an interview with a local Syrian newspaper, the prime minister decided to expel him.

Then Ammash dedicated his efforts to education. He founded the Al-Jazeera private university and occupied the position of the university's dean between 2005 and 2010. The university thrived and became one of the scientific monuments in Syria, with a capacity of 3,000 students in many specialties, including business management and civil and architectural engineering.

After the outbreak of the Syrian revolution in 2011, Ammash emerged as an activist in the very first days, through his participation in demonstrations and his support for the protestors’ peaceful demands. Ammash called on the regime to respond to protestors’ demands and to stop the military and security establishment’s solution for the crisis in order to move to the transitional phase of building a new civil and democratic Syria. Ammash also participated in several political conferences and initiatives:

·         He played the main role in organizing the second Semiramis Conference, which was held on July 3rd, 2011 to advertise the revolution's demands of moving into a civil and democratic state and [calling for] the immediate stop of the military and security solution. This was the last public conference held in Damascus.

·         He joined the national democratic initiative to cooperate with several public figures and former officials such as the former information minister, Muhammad Salman. The goal of the initiative was to put together a transitional political program to solve the crisis.

·         Ammash supported the establishment of the Syrian National Council and communicated with some of its members to discuss matters related to the political opposition and how to reinforce the role of the active coordination committees inside Syria.

Assad's state security arrested Ammash on April 4th, 2012 and detained him in Ibn al-Khatib security branch, then Adra prison, for five months. The charges were calling for armed opposition to topple the regime and communication with a foreign country.

The last political activity for Mr. Ammash was his cooperation with some other oppositionists and activists in establishing the "National Democratic Rally" in Hatay on the Turkish-Syrian border. Through the Rally, Ammash seeks the unification of Syrian opposition and the clarity of its goals before going to Geneva 2.

– A Document About the Transitional Program For Freedom And Development In Syria's Future, part of the manuscript was written in prison and the other parts were written during 2012 and 2013. The document includes ideas about the state of rights, freedom, justice and democracy in the new Syria, it starts from the transitional phase, and ends with the state of freedom and development.

– In 2013, Ammash finished a study about the program of rebuilding Syria and how to eliminate the damages of the crisis. It also includes plans for the economic development in the short-term and medium-term future and how to finance the projects by the cooperation between the people, the state, the investors and the friends abroad.

– Dozens of studies and articles about the economic development, published in Arab and international newspapers and magazines.