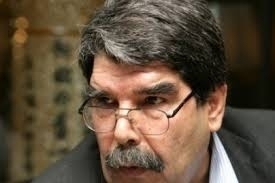 Several months after the start of the Syrian revolution, the summer of 2011 saw the rise of Saleh Muslim Muhammad as a prominent Kurdish politician in the Syrian arena with the Democratic Union Party (PYD) that started its political activities publicly in the northern Kurdish areas; Muhammad had served as the party’s president the previous year. The other factor behind the rise of Muhammad as a political figure was his election as General Deputy Coordinator of the National Coalition for Syrian Revolutionary and Opposition Forces, the main opposition coalition inside Syria.

Muhammad began his political activism in the early 1970s. He was born in 1951 in Sharan village in the northern region of Ain Al-Arab, “Koubany,” the majority of whose population are Kurdish. Muhammad was brought up in a provincial, middle class family that encouraged higher education as a way to rise in the hierarchical Kurdish social ladder. Muhammad completed his primary and secondary education between the city of Ain Al-Arab, Damascus and Aleppo. He graduated from Abd El-Rahman El-Kawakibi college in 1969.

In the early 1970s, Muhammad joined his older brother who was studying at Istanbul Universitie. Muhammad studied chemical engineering at the University of Istanbul where he graduated in 1977. Those years were an integral part of the transformation of his personal political awareness.

In those years, the bloody civil conflict between the religious-national Turkish right and Ataturk’s national left came to an end with the famous coup d’état in March of 1971. The Turkish political parties clashed on everything, but all agreed not to admit the presence of the Kurdish people in Turkey. The seventies drove the national Kurdish political consciousness in Turkey far away from the two traditional political parties of the religious right and the national left. Turkish universities played a pivotal role in the formation of the Kurdish political consciousness and in organizing the Kurdish students to form the Kurdistan Workers’ Party (PKK) at the end of that decade.  Muhammad has believed in the political views of this party ever since.

Saleh Muslim Muhammad did not immediately begin his political activity after he graduated. The Kurdistan Workers’ Party was not yet a popular party in the Kurdish areas in Syria. Throughout the eighties, Muhammad worked as a chemical engineer in a public company in the Kingdom of Saudi Arabia, where he met the organizing political groups in the Kurdistan Workers’ Party and the other Kurds who were spread throughout the kingdom. He then became a political activist.

Muhammad returned to Syria in the early nineties and joined the Syrian Engineers’ Syndicate. He remained, however, among the left-leaning Kurdish social base with ties to the PKK.  The Kurdistan Workers’ Party did not have an active organization interested or involved directly in the Syrian-Kurdish issue.

Since that time, all the Kurdish grassroots groups allied with the Kurdistan Workers’ Party remained under pursuit from the Syrian security, until the establishment of the Democratic Union Party (PYD) in 2003, where Muhammad became a member of its Executive Committee. In those years, which were difficult on all PKK supporters, Muhammad was arrested twice. The first [arrest was] in the summer of 2004, when he remained in detention for almost a year, only to be recaptured in 2006 and released after few months. The toughest life experience Muhammad encountered was in 2009, when a Syrian security patrol raided his home while he was away, captured his wife, and imprisoned and tortured her physically and psychologically for nine consecutive months.

Muhammad was elected as joint secretary of the PYD (parties close to the PKK traditionally have joint positions between men and women).  He has shined in the Kurdish-Syrian political arena since the early months of the Syrian revolution in March 2011.

Muhammad engineered the political and diplomatic promotion of his party’s interests in the national, regional and international arenas. Those policies have leaned towards a non-polarized position, neither with regime nor with the Syrian opposition. Later on, in order to protect its people, the party successfully founded a loyal military wing, the YPG units. These units have waged many battles against Islamic armed opposition forces that wanted to extend their control over the Kurdish areas in the north of Syria. Muhammad’s youngest son died in the fall of 2012 as result of these confrontations.

Muhammad’s loyalty to his political choices is well recognized in the Kurdish-Syrian arena. All the members of his family are involved in the political work. He is considered a very active advocate for his party’s opinions, defending them while traveling in many countries. On the other hand, Muhammad can’t be transformed into a traditional Kurdish political leader because of the organizational structure of parties close to the PKK. The Kurdish parties rally around traditional community leaders and the absolute leadership of Abdullah Öcalan. Furthermore, many of the decision makers do not consult with the local leadership of these parties. They do, however, consult with the military leaders of the PKK based in the Qandil mountains in northern Iraq.