Rustom Mahmoud writes for The Syrian Observer on Ibrahim Miro, the silent Minister of Economy and Finance in the Syrian interim government 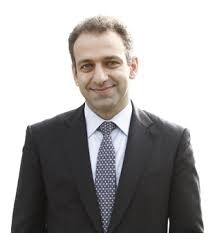 The name of Ibrahim Miro emerged as a public figure when he was nominated on November 11, 2013 to be the Minister of Economy and Finance in the Syrian interim government, headed by Ahmad Tomeh. The presence of Miro was considered to be a representation of Kurdish-Syrian participation in the interim government on the one hand and, on the other hand, he represented the participation of the younger generation since he is the youngest minister of economy and finance in the Arab world, at only 35 years old.

Ibrahim Miro descends from the Kurdish village of Mozlan in the far northeast of Syria. He was born in 1978 and finished secondary school in al-Malikieh village (Derek), Hasakeh Province, before moving to study in Holland in the late nineties.

Two things pervaded the psychological and political world of Ibrahim Miro during the period of his presence in Syria. The first was his uncle Dahham Miro, a notable in the Kurdish-Syrian political arenas who had been the secretary of the Syrian Kurdish Democratic Party since 1971, when Almulla Moustafa Al-Barazani nominated him to be a uniting figure for all of the party’s factions after many deep disagreements in this Kurdish traditional party had occurred in the mid-sixties. But Dahham Miro was pursued by the Syrian security agencies, which arrested him in 1973, and he was imprisoned for seven years. That ideological and familial, political atmosphere was the deepest and most influential in Ibrahim Miro’s early life. The second event was the assassination of his brother, political activist Dr. Jamsheed Miro, with all the clues pointing to the involvement of the Syrian security agencies.

Miro studied Economics at the Economics School at Amsterdam University and earned a Master’s degree studying in Macro, micro, and social economy, then began working in the financial and banking business as a consultant in the Dutch Central Bank.

Ibrahim Miro  participated in the Syrian revolution since its beginning as a “Syrian expatriate.” His activity has been divided into three integral parts. The first part was his contribution holding a number of meetings with Kurdish youth activists in several European countries, until those activities took shape in the expanded meeting of the Kurdish-Syrian activists in the capital of Sweden in October 2011, with a civil-political organization, The City Waves, ASKIA. ASKIA aimed to be an organization of support and development for (building) the capacity of Kurdish activists inside Syria. The second part of Miro’s activity was joining the public Syrian political body that represents the Syrian revolutionaries as an effective member of the Kurdish bloc in the Syrian National Council since its establishment. He then became a member of the Council’s Secretariat during the famous meeting of the Syrian National Council in the capital of Qatar in November 2012.

The last and the most effective component of Miro’s activity in the Syrian revolution was in his career, since he became a member in the economic working group for Syria that was founded in May 2012, and run for the most part by the “Friends of Syria” group, with the supervision of the UAE and the German government. The group has provided several management plans and logistical support for the Syrian areas outside of regime control. But most of those projects were never effectively implemented on the ground because of the internal conflict in most of those areas and the difficulty of forming a bureaucratic side that is able to manage and adapt in those areas.

Ibrahim Miro is regarded as among the young generation of the Kurdish-Syrian political activists who combine three formative characteristics distinguishing them from the former generations. They aren’t official members in the national Kurdish parties in any of their varieties, and their nationalist consciousness and political culture was formed in the atmosphere of the community they grew up in and not by the regulatory organizational parties. Also of note is their educational achievement, since their [these activists’] educational, occupational, and bureaucratic capital extends beyond the narrow domain of being just professionals in political and party work. Lastly is the way they contribute in public to the Syrian matter. They aren’t just a party or Kurdish activists in the public Syrian activity; they are a combination of capabilities, aptitudes, and the widest network of relationships with the components of the Syrian community. That’s what qualifies them to perform this activity and not be [merely] Kurdish-Syrians who have a specific “portion” of any Syrian “cake.”