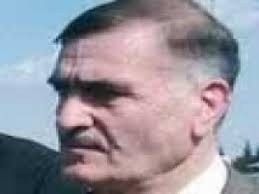 On 21 February 2014, after months of political and social silence, a public demonstration took to the streets of Qamishli in protest against a pro-regime rally which had been staged in the city a few days earlier. Notably, the only prominent political figure to take part in the demonstration was Hasan Saleh, a member of the political bureau of the Kurdish Yekiti party. In fact, he is the only political figure left in the city, the only one who has not escaped from Qamishli or abandoned anti-regime activity since the revolution begun.

Hasan Saleh was born in 1947 in the Tanuriya village of Qahtaniya town in the north east of Syria. He was born to a family of simple Kurdish farmers and finished his pre-university education in Qamishli. Saleh comes from the second generation of young Kurds who joined the Kurdish National Movement in Syria, whose first party in Syria, the Kurdish Democratic Party, was founded in 1957. From its early years, the party became a popular organization, particularly among Kurdish students, due to the limited political liberties available in Syria then. In 1965, Saleh, like thousands of his peers of Kurdish senior high school students, became a member of the party.

Saleh was committed to party activity throughout his university experience, first while studying geography in Damascus University and then during his work as a teacher in Qamishli. In the interim, internal disagreements had swept through the Kurdish political movement, and in particular a division between the classical and the leftist branches.

Saleh opted for the Kurdish Yekiti party in Syria, eventually becoming a leading member. The Yekiti party had three characteristics which, combined, were made it unique among Kurdish parties.

Firstly, while it has a strong nationalistic attitude, this is accompanied by a desire to maintain the political identity of Syrian Kurds specifically, and not to become affiliated with Iraqi or Turkish Kurdish movements. Perhaps most importantly, the Yekiti party has made the influential decision of not appointing a “leader,” rather, the party has a secretary-general position which is rotated every three years.

Saleh did not gain public recognition in Kurdish and Syrian circles until 2002, when he led a public protest in front of the Syrian parliament, after which was he was detained and imprisoned for 18 months.

Upon his release, he was elected as secretary-general for the party from 2003 until 2006 During his tenure he was subjected to intense scrutiny, in terms of security and harassment. He was forced to change his place of work and his family was also harassed.

In 2010, Saleh was again arrested by the Syrian authorities, and was sentenced by the Supreme State Security Court to three years in prison.

His arrest followed the Yekiti party general conference in the summer of that year in which Saleh, along with other leading members, proposed changing the party’s name to the “Yekiti Party of Kurdistan” and the adoption of “autonomy” as a solution for the Kurdish question in Syria.

Although the proposals were not adopted at the conference, the regime arrested Saleh and his colleagues, accusing them of “attempting to divide the country.”

Saleh was released about a year after his arrest, when a general amnesty was announced at the beginning of the Syrian revolution.

Saleh is again the secretary-general of the Yekiti party, which, despite its radical Kurdish nationalism, insists that solving the Kurdish question can only be achieved through agreement with other Syrian political bodies, rather than forging alliances with non-Syrian Kurdish movements, as other Syrian Kurdish parties have tended to do.

On a personal level, Saleh stands out for his organizational skills, and his education. Because of this, Saleh had been the most prominent figure attending and participating in popular protests in Qamishli throughout 2011 and 2012. Saleh, over 60 at that time, would participate in all formal, youth, demand-led protests. He also remained in the city as a well-known political actor, despite all the risks which have befallen many members of the Kurdish political movement, and led to many of their deaths.

Saleh appears to be the popular political figure most capable of influencing the general public in his constituency, and communicating with them.

Though he belongs to a non-traditional political movement, it holds the same general demands shared by all national Kurdish movements. Moreover, he is simple in his appearance and behavior, which makes him relatable and draws him closer to the life of everyday people.

Despite his affiliation with a leftist national party, Saleh has maintained his stance as a religious conservative man. Most importantly, Saleh does not regard himself as a detached political leader of a certain segment of the population. Rather, he has always taken the initiative to put himself at the forefront of popular actions, regardless of the risks.