Khamis has been considered one of the leading figures of “austere living” in the past five years. He is best known as “the prince of darkness” or the “minister of darkness” 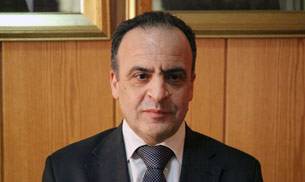 Imad Khamis was appointed PM amid the civil war that has been going on in Syria since 2011. It has been five years since it started and it does not seem to be coming to an end anytime soon. The reshuffle took place in June, two months after Assad's Baath party and its allies won the majority of seats in the country's parliament in an election that was decried internationally as a fraud. Khamis replaced Wael Halki, who failed to help the war in Syria end and the economy revive. Since his appointment the Syrian media is portraying him as a capable clean individual who will fight corruption. A year after the outbreak of the war in 2011, Assad formed a new government under Prime Minister Riad Hijab, only for Hijab to flee soon afterwards to join the opposition.

The current Prime Minister of Syria, Imad Mohammad Deeb Khamis, was born in rural Damascus on August 1, 1961. He holds a degree in Electrical Engineering and a Master’s Degree in Energy Studies from the University of Damascus. He reportedly also has diplomas from specialist courses in management, including Disaster Management and Strategic Management.[1]

From 1987 until 2000, Khamis worked in the Public Corporation for Electrical Distribution and Investment. From 1994 to 1997, he ran the Maintenance Department and from 1997 to 2000, he ran the Department of Operations. In 2001, he transitioned to a United Nations-funded energy conservation project after being appointed the Director of Energy Services in the Ministry of Energy, and he worked in these positions until 2003. In 2005, he became the Director General for the Public Electric Company in the Damascus governorate where he worked until 2008 when he became Director of the Public Corporation for Electrical Distribution and Investment. Since 2011, Khamis has worked as the government’s Minister of Electricity. When President Assad formed a new government June 22, 2016, however, he became the new Prime Minister of Syria.[2]

Keeping the Lights On During the Conflict

Since 2011, the conflict in Syria has placed significant pressure on Syria’s electrical grid. As power generation capacity has fallen over the course of the war, declining by 70% according to a 2015 Chatham House report,[3] power outages have become a significant problem for people living across the country. The unreliability of power has forced many people to rely on generators[4] or dispense with electrical appliances entirely.[5] In 2016, Khamis reported to Parliament that the electrical grid had suffered $3.75 billion in “direct damages.”[6] He has also overseen policy changes in an attempt to continue providing electricity throughout the conflict. One of the most notable changes has been the rationing of power, such that homes receive electricity for a portion of the day rather than the full 24 hours, and Khamis has testified that such a policy was necessary due to attacks on the electrical grid.[7]

In addition to rationing energy, the Ministry of Electricity under Khamis’ leadership has overseen the expansion of energy cooperation with Iran, Russia, and China. Efforts have been made to continue joint Syrian and Iranian work on the Tishreen Thermo Power Station, and there have been talks regarding a power generation station financed by the Iranian Mabna Company, costing 400 million Euros.[8] Additionally, Syria and Iran formed a joint committee to further cooperation in the electricity sector.[9] Khamis also sought to put in place the frameworks necessary for Russian companies to participate in rebuilding Syria’s electrical grid and to establish a joint committee between Syria and Russia to facilitate cooperation on electricity issues.[10] While the Ministry’s bilateral relations with China were not as expansive as with Iran or Russia, Khamis’ ministry did hold meeting with Chinese companies to discuss reconstruction efforts following the war and to examine the prospect of Syrian-Chinese cooperation on hydroelectric power.[11]

This piece was written for The Syrian Observer by Jacob Uzman.