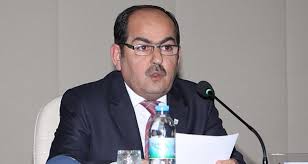 Mustafa was the child of a middle class Turkmen family from Jarablus, Aleppo. He studied at Aleppo University, majoring in economics, and worked in the field of business and financial management for 24 years. His business grew and expanded to Turkey, Libya, Saudi Arabia and Bulgaria.

The Turkmens are a Turkic ethnic group that have lived in Syria, mainly concentrated in the north, in the Turkmen Mountain area in Lattakia close to the Turkish border, as well as in Aleppo, Idleb, Homs, Tartus and the Damascus region. The Turkmen population, however, is small. Most estimates give the figure of 500,000 in Syria.

Like many other communities under the the Assad regime, the Turkmens were banned from publishing or writing in Turkish. The government did not recognize them or other ethnic groups as minorities, preferring to stress the unity of the Arab nation. Supported by Turkey, a staunch foe of President Bashar al-Assad, they took up arms against the regime soon after the start of the uprising in 2011.

At the beginning of the Syrian revolution, Mustafa put an end to his business career, which began in 1988, and returned to Syria to participate in the revolution.

In 2013, he co-founded the Syrian Turkmen Assembly. He was elected vice-president of the assembly at the first meeting, which was held with the participation of Turkmen delegates from all Syrian regions.

At the second meeting of the assembly held in May 2014, Mustafa was elected by the delegates as president of the Syrian Turkmen Assembly, which is considered as the legitimate representative of the Turkmens of Syria.

Mustafa stepped down as president in 2016 and was succeeded by Mohamad Wajeeh Jumaa. Mustafa, however, was elected member of Assembly Council, which leads the political activities of the assembly at all local, regional and international levels.

Mustafa has represented the Syrian Turkmens since 2014. On March 9, opposition Syrian National Coalition President Riad Seif stepped down due to health reasons. As his deputy, Mustafa replaced him as acting president until an election for the new chief is held. The step has not pleased the Syrian Kurds in the coalition, as there has always been tension between the two communities. Mustafa has supported the Turkish military operation in Afrin, a province with a Kurdish majority.

In his first address, Mustafa said that “continuing confronting despotism and occupation will remain the Syrian choice.” He blamed the states that back the Syrian people for halting support to the Free Syrian Army and for failing to protect the civilians in Syria.

Mustafa also plays a vial role in the process of “Freedom and Dignity Struggle”, which was launched to establish and guarantee the political and cultural rights of Turkmens.