Zaina Erhaim is a Syrian journalist and activist and one of the few people who has been able to report from within the country. 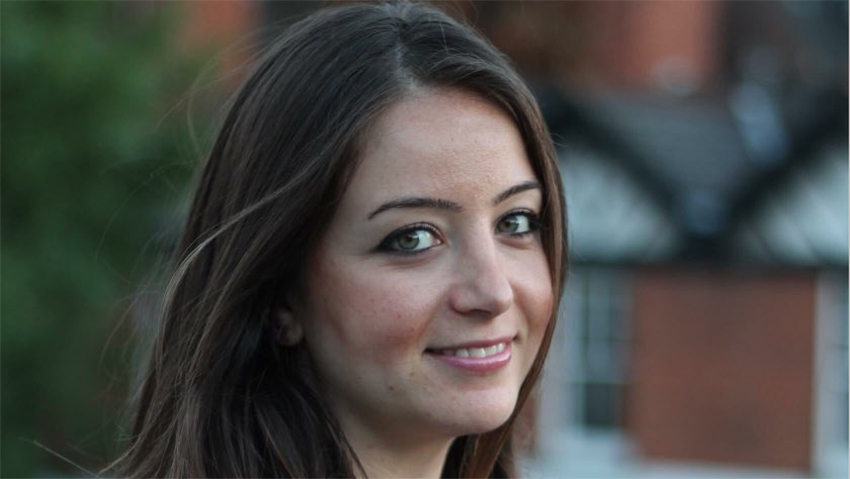 Zaina Erhaim is a Syrian journalist and activist, currently based in London who have reported extensively on the Syrian revolution – she was among the few women journalists and activists who reported from within the country. Erhaim is Senior Media Specialist for the Institute for War and Peace Reporting (IWPR) and as such has trained hundreds of people whilst in Syria to be citizen reporters, notably a large proportion of them women. She is the recipient of many international awards.

Zaina Erhaim was born in the city of Idleb, northwest Syria in 1985, to a middle-class, conservative family. The city of Idleb is generally conservative, but with a good number of educated people, most of whom work in the education sector. As a girl, Zaina had to pay attention to her behaviour, so she would not talk to male friends or eat ice cream on the street because that was not considered proper behaviour for a young girl. At 17, she travelled alone to Damascus to study journalism at the Faculty of Literature despite the opposition of her family, because "no one in the city will marry a journalist,"[1] and because "the press will burn the girls’ honour." She graduated four years later, fell in love with Damascus, and worked for the Syria News website and Orient TV, as well as a freelancer for al-Hayat, a pan-Arab daily. In 2010, she got a scholarship for a master’s Degree in Media from City University in London.

She left behind her then-husband who would himself travel to Saudi Arabia to work and escape military service. He had to spend five years to pay thousands of dollars to be exempted.

But her trip was much shorter than she feared. As soon as the Syrian revolution broke out in March 2011, Zaina decided to return to Syria to take part in it. Her decision was a source of dismay to many of her family and friends. Her husband tried to prevent her from doing so, but nothing he did or said could prevent her from returning. She became, as she describes herself, "haunted by the revolution." In London, she set up a small group of volunteer friends to help the first waves of refugees fleeing from the Homs countryside to northern Lebanon. She collected money and travelled with her friends to Tripoli, Lebanon, where they paid rents to some 60 displaced Syrian families. When the plane took off back to London, Zaina's seat was empty. She stayed in Beirut, with the intention of entering Syria.

Zaina has contributed to the Syrian revolution since its inception. She took part directly in the demonstrations in Damascus and Duma. She met Amer Matar, a newly arrived young man in Damascus from the eastern provinces, to join the drought refugees from Deir-ez-Zor, and who would later become one of the best-known activists, and Carolyn Ayoub, another known Damascus activist, who would not rest day or night. Zaina also covered parts of the events of the revolution for BBC before joining the Institute of War and Peace Reporting to train young journalists.

In Damascus, she took part in demonstrations in the Midan District, then the centre of the anti-Assad protests. She also helped in distributing aid to the families of the victims and detainees in Barzeh and Douma. In Idleb, she accompanied the revolution since its beginnings and followed, not with little concern, its transformation from a peaceful civil uprising to an armed conflict. She monitored and documented the Islamization of the revolution and the entry of Al-Nusra and later ISIS. She monitored the conflict among opposition groups and between opposition and pro-regime militias and covered the tension between the Sunni majority population of Idleb and the besieged Shiite towns in the province. She watched sectarian tensions, hatred, and what she calls "pure evil" grow there.

Zaina attempted, in what her friends described as a "clumsy move," to enter one of these Shiite towns: Al-Fou’aa, along with two BBC reporters. Between the town of Binnish and al-Fou'aa lied only a few miles, but the trip was a transition between two different planets.

Like most of her generation of Syrians, before the revolution she knew little about the difference between the various Muslim communities. And the only thing she knew about the presence of Christian communities was that they highlighted the diverse sectarian composition of the city and that there were “four different types of feasts with different kinds of sweets and we visited different families."

Zaina was shocked by the sense of sectarianism she started to recognize in the revolution. She began to monitor the shift of the civic voice vote that had called for “Syria for all Syrians” into fanaticism and hatred. In her writings and interviews, she focused on revolutionaries from Al-Fou’aa who fought and got killed by rebels in Binnish.

In Al-Fou’aa, she was kidnapped by pro-Assad militias, whom she went to listen to and let the world do. She spent a tough time and was threatened to be killed or handed over to the regime security forces, which meant torture and death too.

In 2013, Zaina resigned from the BBC and worked for IWPR, focusing on training the youth in two areas: journalism and women's empowerment. She trained young journalists who were working without any professional background on the basics of journalism and the production of television reports. When she discovered that all trainees were males, she began to invite girls who had interest in journalism (most of whom had no background or previous experience) to join the training. Now, Zaina leads an NGO in Berlin – Syria Stories –there are some 20 women journalists, who have become capable of writing good stories and earning their living from that.

In addition to the training and to coordinating the publication of their stories on the IWPR website, Zaina established the "Women's Blog" where Syrian women who have no writing experience or journalism skills publish their stories. “Documentation is the core of my focus now,” Zaina says, “as I see how easy it is to tarnish history."

Zaina has also worked on projects for media organizations, training for media offices in local councils, training for advocacy and promotion of Syrian organizations, and the establishment of Aleppo's first women's Internet café, My Space (for free), because all other cafes were strictly masculine. The café started as an Internet café, but then turned to become a centre for training on surfing, computer basics, first aid, and English language courses. The café, which had to close in the city of Aleppo after the regime took over the city, is still functioning in the town of Ebzemo in the Province of Aleppo and has recently started providing women with psychological support as well. It has become a chain of cafés, as there are now five of them in the Idleb and Aleppo provinces.

After 2013, Zaina’s production in journalism became rare in Arabic. She started to write in English, and published in the Economist, the Guardian and, more recently, the German newspaper Die Zeit.

Zaina also directed and filmed documentary films. She produced a series of documentaries, where she interviewed five young women who bravely shared their stories that represent the true story of the country: escaping ISIS in Raqqa, a love relationship with a fighter who died in the war, displacement in Aleppo, the difficulty of finding the basic services in the “liberated areas”, and how a woman can live with shrapnel in the body. Another documentary, “I Was Here” tells about her return to her city, Idleb, for the first time after the Fateh Army (al-Nusra) took over the city. Zaina had to film the documentary from behind a window as the Fateh army did not allow her to shoot "because I am a woman".

Zaina was not harassed in Syria only. In September 2016, the British authorities confiscated her passport at the request of the government in Damascus, effectively preventing her from travelling and blocking her work as an activist. Her passport was taken away by UK border officials when she landed at Heathrow airport. They told her that the document had been reported stolen. She had to use an old passport to return to Turkey.

Zaina was named among the 100 Most Powerful Arab Women in 2016 by Arabian Business and as an Unsung Hero of 2016 by Thomson Reuters. She received the 2016 Index on Censorship, Freedom of Expression award, and the 2015 Press Freedom Prize by Reporters Without Borders in addition to the Peter Mackler Award for Ethical and Courageous Journalism, also in 2015, beside the Mustafa Al Husaine award for the best article written by a young journalist. The last prize she received was by the Women's International League for Peace and Freedom, which she was awarded in 2017 in Germany.