As the security situation in Daraa worsens, a military convoy reached the town of Eastern Ghariyah, al-Etihad press reports. 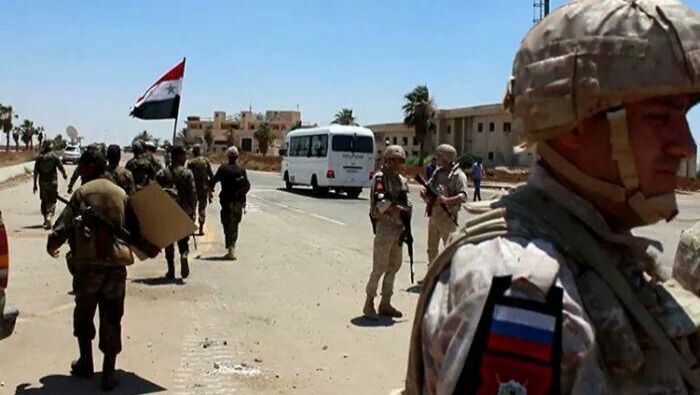 On Wednesday evening, a military group of the Eighth Brigade of the Fifth Corps went to the town of Eastern Ghariyah, in the eastern countryside of the Daraa governorate.

This followed the injury of a Bosra al-Sham citizen, on Wednesday, by stray bullets while working in Eastern Ghariyah.

Adel Mansour al-Mansour -aged nearly 42 years old- who is from Bosra al-Sham, was shot after a random shooting at a wedding party in the Eastern Ghariyah town. Mansour was then taken to the hospital in the city of Bosra al-Sham. The gunshot struck his head, and his health condition is critical.

The envoys went from Bosra al-Sham towards the Eastern Ghariyah and arrested a citizen there upon their arrival. The detained man is reportedly a relative of the groom.

In other news, on Wednesday, several members of the Damascus Authority’s Political Security were attacked in Daraa. The incident happened due to an explosion targeting a car transporting them in the northern countryside.

An explosive device planted by unknown assailants in a taxi transporting four members of the Political Security division detonated on the road between the towns of Kafr Nasaj and Deir al-Adass, north of Daraa.

The blast killed Nazir Hashem Hamish, a resident of Massoud village in the al-Salamiyah area east of Hama. The blast also injured three other members.

The Daraa governorate has been witnessing increasing security tensions recently. The Syrian Armed Forces dismantled explosive devices planted by unknown persons between the neighborhoods of al-Qusour and al-Sabeel in the center of Daraa city.

During the attack, Ahmad Zakaria Kaddour, a member of the Syrian Armed Forces’ 15th Division, was killed.