The regime has announced the latest promotions and movements within the ranks of the regime army, with notorious war criminals being elevated to higher ranks writes Shaam News. 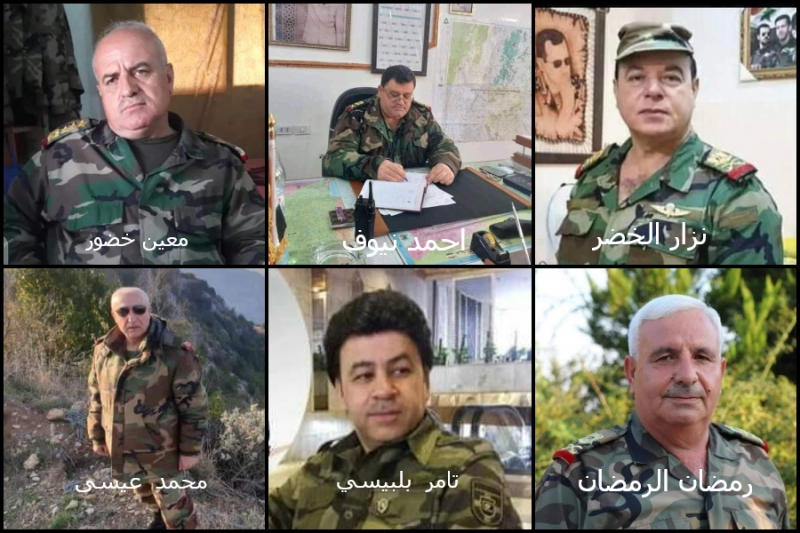 Pro-regime pages revealed recent military transfers and reassignments, approved by the head of the regime, Bashar al-Assad. The changes affected several high-ranking officers in the regime’s army as well as the most prominent criminals who are known to be involved in military operations and crimes against the Syrian people.

Pro-regime media sources revealed the appointment of Maj. Gen. Nizar Ahmad al-Khader, head of the security and military committee in Deir ez-Zor Governorate, as commander of the 17th Infantry Division in the regime’s army.

Pages loyal to Khader, who was hit by rebel strikes in the Idleb countryside last February, congratulated him for Assad’s trust. Khader is one of the most prominent criminal officers and is nicknamed The Eagle. He has a long record of committing crimes against the Syrian people.

Khader previously appeared in a video recording in which he motivates his members to remove the destroyer vehicles on the Idleb fronts, promising an amount of one million Syrian pounds for each member who does that. The video was turned into satirical material at the time.

Pro-regime media sources also revealed the appointment of Maj. Gen. Ahmad Ibrahim Nayouf as commander of the 9th Division in the regime’s army. Nayouf hails from the village of Barmaya, affiliated with the city of Baniyas in the Lattakia countryside.

According to loyalist media sources, the Assad regime also decided to appoint Maj. Gen. Ramadan al-Ramadan to lead the First Corps, in addition to his current appointment as head of the security and military committee in Hama. Tamer Youssef Belbeisi was appointed as the commander of the National Defense militia in Daraa.

According to Pro Justice, Ramadan was born in the town of Mahrusah in the Hama countryside and had a hand in the killing of protesters, in addition to making abhorrent sectarian statements, as he threatened to sweep Daraa and Idleb in response to the peaceful demonstrations that were taking place against the regime.

He was previously mentioned in a Human Rights Watch report, which included testimonies revealing that he issued verbal orders for his commander to open fire on protesters in Daraa on Apr. 25, 2011. He also supervised the targeting and liquidation of peaceful civilians. He is the first person held responsible for exhuming the shrine of Caliph Omar bin Abdul Aziz. Loyalist media sources denied rumors of his death months ago.