Russia is bolstering the ranks of the Fifth Corp with men from southern Syria, but has denied that they are being sent to Libya reports Alsouria Net. 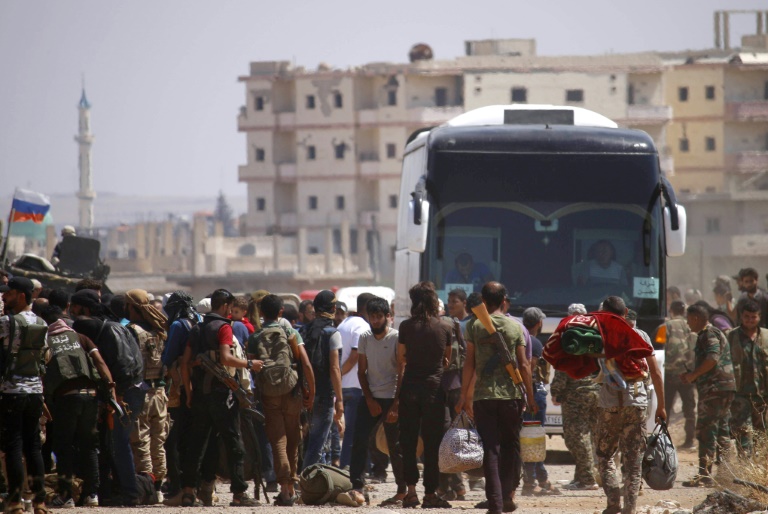 A military source from Daraa informed Alsouria Net that fresh Russian movement has been witnessed in southern Syria, as they make efforts to increase the number of fighters in its Fifth Corps.

The source who requested anonymity, said Russia kicked off recruitment on Tuesday and is working on moving some new fighters to camps in the city of Homs for physical and military training.

Russia is planning to expand the power of the Fifth Corps so that it takes control over areas beyond the city of Busra al-Sham, which is the group’s main center, according to the source.

He said several buses transported young men, per the recent settlement agreement in Quneitra, and headed out to the Homs camps. The source also denied rumors that the buses were carrying fighters to Libya to participate in military operations alongside Khalifa Haftar, commander of the National Libyan Army.

The Russian move came as a surprise in southern Syria amidst a state of security chaos in the area, which is witnessing assassinations via explosive devices targeting Assad forces and other leaders who were previously working for opposition factions.

Earlier, activists from Daraa shared photos and videos over social media of several buses carrying fighters from areas under the Assad regime’s control and said they were heading to Libya.

However, the source confirmed that almost 450 fighters left Quneitra and were on their way to the camps in Homs.

Following the settlement agreement in southern Syria, which was inked in July 2018, Moscow had managed to attract hundreds of fighters in Daraa to the Fifth Corps, mainly in the city of Busra al-Sham in the eastern countryside, under the command of Ahmed al-Awda.

The Fifth Corps was formed in late 2016 under Russian orders to support Assad forces, which had advanced on the opposition with Russian help in recent years.

After Assad’s forces took control over Daraa in July 2018, Russia gave defectors the choice of either joining one of its military forces to fight under its rank or get arrested on terrorism-related charges. This has forced residents of the province to join Russia’s formations under what is known as settlement factions.

The current Russian movements in southern Syria links back to what Daraa has witnessed in the past months, namely the city of Sanamayn where the Assad troops forced an agreement on the residents.

Under the deal, the city was forced to hand over all fighters’ weapons and those whose settlements were rejected were asked to leave for northern Syria. Meanwhile, residents who wanted to stay in the city were obliged to join the Fifth Corps.

Following the conclusion of the settlement agreement in Daraa, the areas were divided into two parts.

The first part includes areas under the Russian control represented by the Fifth Corps, including the city of Busra al-Sham and some of the nearby villages in the eastern countryside of Daraa.

The second part includes all areas that are out of control, witnessing a constant proliferation of weapons, as in the western countryside where the Fourth Division and Military Security branch formations are active.