The Sheikh Karameh Forces kidnapped a number of regime officers after a member of their group was taken and accused of spying for Israel reports Brocar Press. 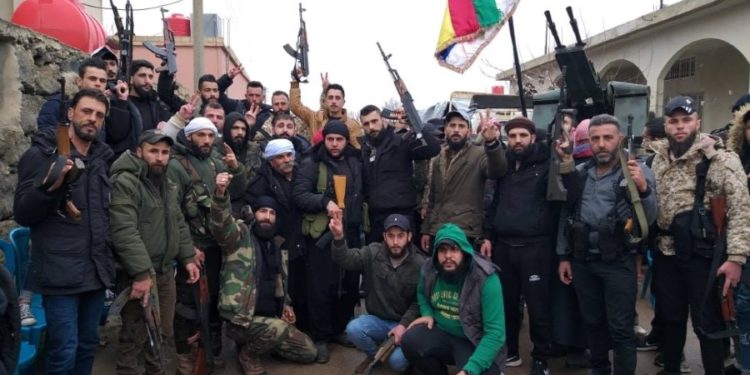 On Sunday, the Sheikh Karameh Forces in Suweida kidnapped six officers from the Syrian regime forces and its intelligence branches in the city of Salkhad in the Suweida countryside.

The group said that the raid and capture had come after confirming that Ra’ad Bali, a member of the group, was being held in a regime security branch on charges of “spying for Israel.”

Regarding the details of Bali’s arrest by a regime security branch, the group said that he had been lured by a girl, Samar Tawfiq Deeb, from the Golan, according to notables from Salkhad.

The group’s statement said that they had investigated the intelligence agency arrest of Bali, who had been kidnapped under mysterious circumstances from the city of Suweida on Feb. 13, 2020. The statement accused three people from the province of kidnapping him and handing him over, after he had been lured on the road by a woman who was referred to simply as “S.D.” whom the group detained last week, according to the Suweidah 24 website.

The group’s fighters kidnapped six people including officers and fighters after Bali’s disappearance was announced, and then released them on the same day as part of a goodwill initiative. They also attacked a Military Intelligence station in the city and exchanged fire with members there, which caused damage to civilian homes last week.

The city of Salkhad is witnessing a state of discontent and concern among residents as a result of these recent developments, amid fears that matters could escalate, increasing the situation of chaos—especially given that the group has threatened to take new measures if the fate of their member is not revealed and the intelligence agencies do not release him. The agencies, meanwhile, have not released any information about his fate, and have not taken responsibility for his arrest.