Captain Mohannad Ali Wassouf was killed when clashes broke out between the police and outlaws in Salhab district reports Enab Baladi. 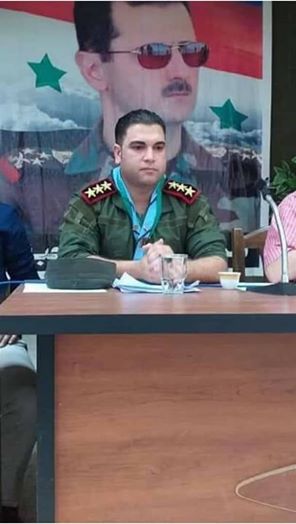 The Hama police department have mourned a captain who was killed during clashes with a group who were described by them as “wanted men and outlaws.”

In a brief statement on its Facebook page, the police agency said that Captain Mohannad Ali Wassouf, director of the Salhab district, died on Tuesday morning, in a “confrontation with a group of wanted men and outlaws.”

The Russian RT site quoted local sources in Hama city as saying that a group of “wanted men raided Salhab district’s center this morning and assassinated the captain.”

The site added that “Wassouf’s body will be transferred from the al-Suqaylabiyah hospital to the Masyaf national hospital, and then to his village of Anboura.”

The Masyaf News site published an image of the mourning ceremonies for Wassouf.

The incident comes less than a month after the deaths of four regime flight officers, who were killed when their helicopter went down in the Hama military airport.