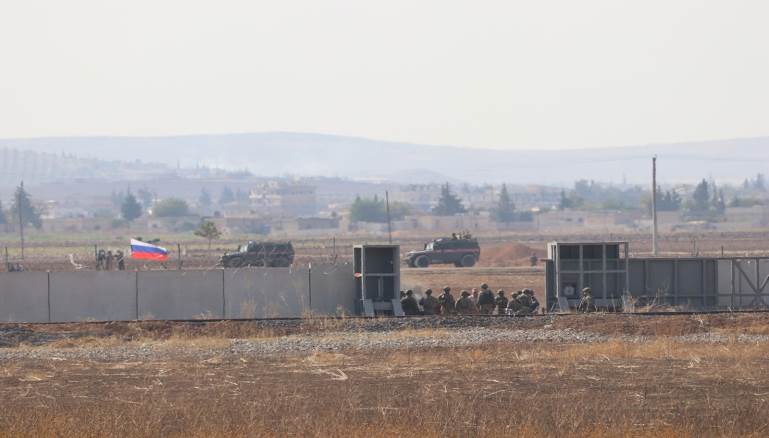 More than 100 Russian soldiers have arrived at Qamishli airport in Hassakeh province, which is controlled by regime forces, coinciding with the arrival of a large number of Russian vehicles that arrived on a massive Russian Ilyushin cargo plane, according to Al-Modon’s correspondent, Abdel Kareem al-Rajaa.

Al-Modon’s sources said that what was happening now was preparation to transform Qamishli airbase into a third Russian airbase in Syria. The Agricultural Club square around the airport, which is for parties and weddings, could be turned into a garage for Russian vehicles, with about 50 Russian military vehicles currently present there.

The airport has also seen preparations, made about a week ago, whereby a Russian surface-to-air missile launcher of unknown type was set up at the airport, as well as a large number of rockets which were placed in large wooden cases. Regime fighters oversaw the transport of these rockets to the airport storehouses.

After being stationed in the airport, the Russian soldiers launched a drone, but it crashed minutes after launching, falling on the electric wire network for the airport, and then on soldiers’ dormitories, which caused confusion in the airport and a power cut.

Al-Modon learned from sources at the airport that the Russian soldiers stationed there receive a monthly salary of 300 dollars while the Russian soldiers in the official Russian forces in Syria earn between 500 to 700 dollars. Syrian soldiers receive about 60 dollars a month. This has raised the possibility that these Russians are from private security companies and not official soldiers.

This new deployment of Russian forces at Qamishli airport comes after the Turkish-Russian agreement in Sochi and the partial withdrawal of American forces from the area east of the Euphrates, where there had been a number of American bases, including the Hemo base, which is no more than five kilometers from Qamishli airport.