The Brussels III conference was co-hosted by the UN and the EU and aimed to set out a vision for the future of Syria. 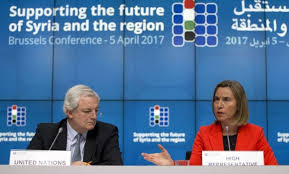 More than 100 Syrian civil society organizations have published a joint statement expressing their position regarding the third Brussels conference on Syria held in Brussels from Mar. 12, 2019, to Mar. 14, 2019. As members of Syrian civil society, the statement’s signatories welcomed the overall outcomes of the conference and pointed out what they considered as deficiencies.

Below is the statement as was signed by 110 civil society groups:

The Third conference of the future of Syria and the region was held in Brussels from March 12 to March 14, 2019, co-chaired by the European Union and the United Nations.

As members of the Syrian civil society, the organizations listed below, we welcome the overall outcomes of the conference and in particular:

However, we find the declaration of the co-chairs of the conference fell short on the following points:

1. Directly and openly condemning the Syrian regime and its allies of targeting civilians in Syria, including the recent and current attacks on Idlib;

2. Directly and openly condemning all parties of the conflict responsible of the forced displacement actions that occurred in 2018;

3. Raise attention to the increasingly difficult situation of the Syrian refugees in all host countries (including in Europe) with increased irresponsible hate-inciting declarations by politicians in these countries against the Syrian refugees and inaccurate false-hope-building talks about the return of refugees without a clear and defined counter communication fact-based strategy, all leading to increased social tension and violence against the refugees;

4. Directly hold the Syrian regime accountable for the safety and security of the IDPs returning to their homes while the UN agencies based in Damascus are mainly focusing on their livelihood conditions, almost regardless of their protection;

5. Insisting more clearly on the mandatory role of the Syrian civil society and the Syrian local communities in the design, the implementation and the monitoring of the all funding going towards the Syrian people inside and outside of Syria. The role of free media in the monitoring is also crucial;

6. Clearly calling out and holding accountable all parties of the conflict and their sponsors for the protection and safety of Syrian civil activists and particularly humanitarian actors in all of Syria and in neighboring countries;

7. Put in place mechanisms of monitoring and reporting on the use of the pledged funds according to the principals and declarations of the declaration. The phasing-in of Early Recovery without defined agreed-upon strategies and monitoring mechanisms may constitute, in that regards, a real risk of breaching the rules that the declaration declared on reconstruction.

We, as Syrian civil society organizations, will continue our commitment and action towards supporting our people inside and outside of Syria in its resilience and actions to reach its aspirations, to prepare and to participate in the future rebuilding of our country.