Syria’s armed conflict escalated even further in 2013 as the government intensified its attacks and began using increasingly deadly and indiscriminate weapons, culminating in a chemical weapons attack on the Damascus countryside on August 21 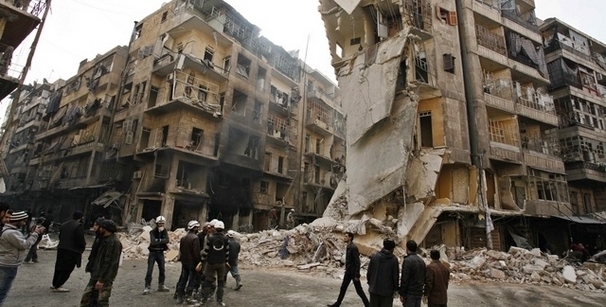 Syria’s armed conflict escalated even further in 2013 as the government intensified its attacks and began using increasingly deadly and indiscriminate weapons, culminating in a chemical weapons attack on the Damascus countryside on August 21.  Government forces and pro-government militias alsocontinued to torture detainees and commit executions.

Armed opposition forces, including a growing number of pro-opposition foreign fighters, have also carried out serious abuses including indiscriminate attacks on civilians, executions, kidnapping, and torture. According to United Nations Secretary-General Ban Ki-moon, as of July 2013 more than 100,000 people had been killed in the conflict. The spread and intensification of fighting have led to a dire humanitarian crisis with millions internally displaced or seeking refuge in neighboring countries.

Attacks on Civilians, Unlawful Use of Weapons

On August 21, hundreds of civilians, including many children, were killed in a chemical weapons attack on areas near Damascus. A UN investigation determined that the nerve agent sarin was used. While the Syrian government denies responsibility, available evidence strongly suggests that government forces were responsible for the attack. In response to US and French threats of strikes in response to the attack, Syria acceded to the Chemical Weapons Convention and agreed to eliminate its chemical weapons in the first half of 2014.

Syrian armed forces have also continued to use cluster bombs—weapons banned by the 2008 Convention on Cluster Munitions, which Syria has not signed. Human Rights Watch has identified 152 locations where government forces used at least 204 cluster munitions, in 9 of the country’s 14 governorates. The actual number of cluster munitions used by Syrian government forces is probably higher.

The Syrian air force has dropped incendiary weapons in populated areas in dozens of instances, including on a school playground in al-Qusayr in December 2012.Incendiary weapons contain flammable substances designed to set fire to objects or to cause burn injuries and death.

Syria’s air force also repeatedly carried out indiscriminate, and in some cases deliberate, strikes against civilians, and its army has also struck populated areas with ballistic missiles. Human Rights Watch investigated nine apparent ballistic missile attacks in 2013 that killed at least 215 people, including 100 children. No military targets were struck in the attacks and in seven of nine cases investigated Human Rights Watch found no signs of any apparent military targets in the vicinity.

Executions by Government and Pro-government Forces

On May 2-3, these forces killed at least 248 people, including 45 women and 43 children, in the towns of al-Bayda and Baniyas in Tartous governorate. The overwhelming majority were summarily executed after the end of military confrontations. The attacks were one of the deadliest instances of mass summary executions since the start of the conflict.

At least 147 bodies were found in the city of Aleppo’s river between January and March. The location where the bodies were discovered and information about the victims’ last known whereabouts indicate that the executions most likely took place in government-controlled areas, although the perpetrators or their motivation remains unknown.

Since the beginning of the uprising security forces have subjected tens of thousands of people to arbitrary arrests, unlawful detentions, enforced disappearances, ill-treatment, and torture using an extensive network of detention facilities throughout Syria. Many detainees were young men in their 20s or 30s; but children, women, and elderly people were also detained.

Those arrested include peaceful protesters and activists involved in organizing, filming, and reporting on protests as well as journalists, humanitarian assistance providers, lawyers, and doctors. In some instances, activists reported that security forces detained their family members, including children, to pressure them to turn themselves in. A large number of political activists remain in incommunicado detention while others have faced trial, including before military and counterterrorism courts, for exercising their rights.

On February 3, security officials arrested Mohammed Atfah, a Syrian Arab Red Crescent volunteer working with children in Homs, at a checkpoint. A detainee who was held with Mohammed and later released told his family that Mohammed’s health had deteriorated so significantly in detention that he was no longer able to recognize people around him.

On March 13, security forces also arrested Nidal Nahlawi and his friends in Damascus while they were planning relief operations. Nidal has been accused of supporting terrorism under the overbroad July 2012 Counterterrorism Law.

He and other activists, including several members of the Syrian Center for Media and Freedom of Expression (SCM) are standing trial before a special counterterrorism court on the basis of this law. The court does not meet basic international fair trial standards. The charges are brought under the guise of countering violent militancy, but the allegations against the activists actually amount to such acts as distributing humanitarian aid and documenting human rights abuses.

Released detainees and defectors describe a range of torture methods used by Syrian security forces including prolonged beatings, often with batons and wires, use of painful stress positions, electrocution, sexual assault, the pulling of fingernails, and mock execution. During a visit to an abandoned state security detention facility in Raqqa in April 2013, Human Rights Watch found a basat al-reeh torture device—a cross-shaped contraption used to immobilize detainees during torture.

Several former detainees said they witnessed people dying from torture in detention. At least 490 detainees died in custody in 2013, according to local activists.

In February 2013, Human Rights Watch documented the death in detention of Omar Aziz, 64, a peaceful activist who had been helping local committees deliver aid. A second detainee Ayham Ghazzoul, 26, a human rights activist, and member of SCM, died in detention in November, a released detainee told his family.

Armed opposition groups have increasingly carried out serious abuses including indiscriminate attacks, extrajudicial executions, kidnapping, and torture. Foreign fighters and jihadist groups have been among the worst perpetrators of the abuses that Human Rights Watch has documented.

On August 4, a coalition of opposition groups led predominately by Islamist militant groups conducted an operation in the Latakia countryside in which some of the groups killed at least 190 civilians, including 57 women, at least 18 children, and 14 elderly men. Many of them were summarily executed. Armed opposition groups have been implicated in other indiscriminate attacks against the civilian population, including car bombings and mortar attacks on government-held civilian areas inside Syria as well as cross-border strikes on Shia villages in Lebanon.

Armed opposition groups fighting in Syria are also using children for combat and other military purposes, and have used schools as military bases, barracks, detention centers, and sniper posts, turning places of learning into military targets and putting students at risk.

The UN Office for the Coordination of Humanitarian Affairs (OCHA) estimates that 4.25 million Syrians are internally displaced. In 2013, humanitarian aid agencies experienced significant challenges in getting assistance to the displaced and affected civilian population within Syria because of sieges imposed by both government and opposition fighters, the government’s continuing refusal to allow assistance to come in across the border, and armed opposition groups’ failure to guarantee security for humanitarian workers.

Attacks on healthcare workers and facilities have significantly eroded the country’s ability to protect the right to health: 32 of the country’s 88 public hospitals have closed and government forces have detained, tortured, and killed hundreds of health workers and patients, and have deliberately attacked vehicles carrying patients and supplies. A recent report of the UN Human Rights Council (UNHRC) concluded that “the denial of medical care as a weapon of war is a distinct and chilling reality of the war in Syria.”

As of November 18, 2013, 2.23 million Syrians had registered or were pending registration as refugees with the UN Refugee Agency (UNHCR), the vast of majority of them in Lebanon, Jordan, Turkey, Iraq, and Egypt. In 2013 Iraq, Jordan, and Turkey denied entry to tens of thousands of Syrians, either by limiting daily numbers and the profile of those who could cross or by closing border crossings entirely and only sporadically allowing a limited number to cross. Syrians stranded as a result lived in poor conditions and were at risk of attacks by government forces.

On January 13, 2013, Egyptian airport officials deported two Syrians back to Syria, in violation of Egypt’s non-refoulement obligations, and, on July 8, without warning, the Egyptian government changed its entry policy for Syrians by requiring them to obtain a visa and security clearance beforehand. On the same day, Egypt denied entry to 276 people arriving from Syria, including a plane forced to fly back to Syria. On July 19 and 20, Egyptian security forces arrested dozens of Syrian men and some boys at checkpoints on main roads in Cairo, many arbitrarily. The authorities deported at least 24 of them, including 7 boys, to neighboring countries.

In 2013, the number of refugees from Syria attempting to reach Europe, including through dangerous smuggling routes, has increased. While some European Union countries offer them safety, in others, including Greece, they face detention and significant obstacles in getting protection.

UNHCR reported that over 75 percent of the registered Syrian refugees in neighboring countries are women and children who face particular vulnerabilities. Aid agencies report that domestic violence, sexual harassment, and exploitation have increased and social constraints and fear limit the mobility of refugee women, restricting their access to income-generating activities or health and other critical services.

At time of writing, UNHCR reports that only 62 percent of its appeal for the regional refugee response is funded, leaving a US$1.14 billion budget shortfall. As a result, UNHCR has cut assistance to refugees, including subsidization of health care and provision of basic goods.

Despite these developments, Russian and Chinese opposition precluded the Security Council from referring the situation to the International Criminal Court (ICC), obstructing accountability for violations in the conflict.

The General Assembly and the Human Rights Council passed resolutions on Syria with overwhelming majorities in 2013. The Human Rights Council extended until March 2014 the international commission of inquiry mandated to investigate violations and identify where possible those responsible. A total of 64 countries called on the Security Council to refer the situation in Syria to the ICC, including 6 Security Council members: France, the United Kingdom, Luxembourg, Argentina, Australia, and South Korea. France included an ICC referral in an early draft of the Security Council resolution on chemical weapons use, but this was later removed during negotiations over the text. Neither the United States nor China expressed support for a referral. Russia said an ICC referral would be “ill-timed and counterproductive.”

Syrian opposition factions under the umbrella grouping, the National Coalition of Syrian Revolutionary and Opposition Forces continued to gain international support in 2013 and recognition as the legitimate representative of the Syrian people. Despite this however, the coalition has failed to create a unified political or military opposition. Armed opposition groups in Syria are receiving financial and military support from Saudi Arabia, Qatar, Turkey, and the US. The UK and France provide non-lethal aid to armed opposition groups.

The governments of Iran, Russia, and China continued to support the Syrian government either diplomatically or through financial and military support.

The European Union as a whole remained the second largest humanitarian donor for the Syrian crisis after the US. However, despite the EU’s stated commitment to both the ICC and to justice for serious crimes, the EU high representative failed to ensure a strong collective EU voice and strategy that would advance the chances of bringing the crimes in Syria before the ICC. Twenty-seven EU member states—all but Sweden—joined a Swiss-led initiative calling on the Security Council to refer the situation in Syria to the ICC.