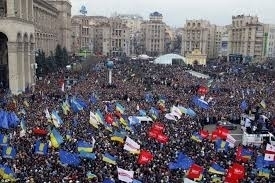 On behalf of the Syrian people, and all people aspiring for freedom around the world, the Syrian Coalition congratulates the people of Ukraine on their victory over the pernicious influence of foreign tyrannical powers.

The will of the Ukrainian people was clearly expressed and heard. This offers a glimpse of hope to the Syrian people striving for freedom, justice, and democracy. What happened in Ukraine makes it clear that people of the world living under the rule of tyrannical regimes will eventually revolt and achieve their freedom no matter what it takes. The will of the people will defeat tyrants everywhere, and the flag of freedom will fly high in the sky of Syria as it was flown in the Ukraine.

On this memorable occasion, we salute the free people of Ukraine.