An elite group of scholars, clerics, and defected officers has issued a call for a truce on the occasion of Eid. Below is the statement translated by the signatories 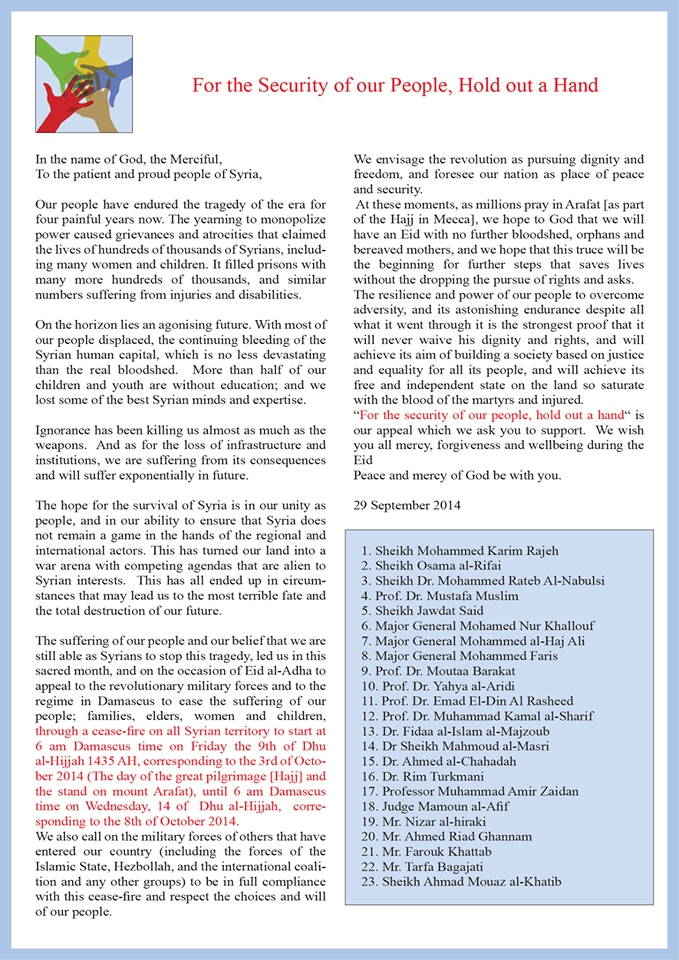 In the name of God, the Merciful,

O the patient and proud people of Syria,

Our people have endured the tragedy of the era for four painful years now. The yearning to monopolize power caused grievances and atrocities that claimed the lives of hundreds of thousands of Syrians, including many women and children.  It filled prisons with many more hundreds of thousands, and similar numbers suffering from injuries and disabilities.

On the horizon lies an agonizing future. With most of our people displaced, the continuing bleeding of the Syrian human capital, which is no less devastating than the real bloodshed. More than half of our children and youth are without education; and we lost some of the best Syrian minds and expertise.

Ignorance has been killing us almost as much as the weapons. And as for the loss of infrastructure and institutions, we are suffering from its consequences and will suffer exponentially in future.

The hope for the survival of Syria is in our unity as people, and in our ability to ensure that Syria does not remain a game in the hands of the regional and international actors. This has turned our land into a war arena with competing agendas that are alien to Syrian interests. This has all ended up in circumstances that may lead us to the most terrible fate and the total destruction of our future.

The suffering of our people and our belief that we are still able as Syrians to stop this tragedy, led us in this sacred month, and on the occasion of Eid al-Adha to appeal to the revolutionary military forces and to the regime in Damascus to ease the suffering of our people; families, elders, women and children, through a cease-fire on all Syrian territory to start at 6 am Damascus time on Friday the 9th of Dhu al-Hijjah 1435 AH, corresponding to the 3rd of October 2014 (The day of the great pilgrimage [Hajj] and the stand on mount Arafat), until 6 am Damascus time on Wednesday, 14 of  Dhu al-Hijjah,  corresponding to the 8th of October 2014.

We also call on the military forces of others that have entered our country (including the forces of the Islamic State, Hezbollah, and the international coalition and any other groups) to be in full compliance with this cease-fire and respect the choices and will of our people.

We envisage the revolution as pursuing dignity and freedom, and foresee our nation as a place of peace and security.

At these moments, as millions pray in Arafat [as part of the Hajj in Mecca], we hope to God that we will have an Eid with no further bloodshed, orphans and bereaved mothers, and we hope that this truce will be the beginning for further steps that save lives without abandoning the pursuit of rights.

The resilience and power of our people to overcome adversity, and its astonishing endurance despite everything it went through is the strongest proof that it will never waive its dignity and rights, and will achieve its aim of building a society based on justice and equality for all its people, and will achieve its free and independent state on the land so saturated with the blood of the martyrs and injured.

“For the security of our people, hold out a hand “ is our appeal which we ask you to support.  We wish you all mercy, forgiveness and wellbeing during the Eid.

Peace and mercy of God be with you.

Sheikh Osama al-Rifai (President of the Islamic Council of Syria)

Dr. Fidaa al-Islam al-Majzoub (Member of the Board of Trustees of the Islamic Council of Syria)

Dr Sheikh Mahmoud al-Masri (A doctor, and an expert on manuscripts and the history of science)

Dr. Ahmed al-Chahadah. (Member of the Board of Trustees of the Islamic Council of Syria)

Mr. Tarfa Bagajati (Board member of the European Initiative for Muslim social cohesion)