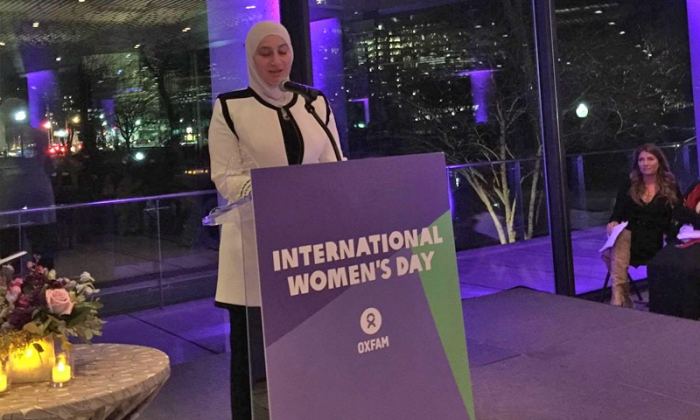 A leading Syrian protester was honored on Women's Day by Oxfam America, a statement released by Oxfam reported.

Syrian activist Majd Chourbaji from Women Now for Development Centers was honored with the Right the Wrong Award in Washington, DC, together with two other leading women activists: Fartuun Adan and Illwad Elman, a mother and daughter pair who run the Elman Peace and Human Rights Centre in Somalia.

The award was granted in recognition of their efforts to fight injustice and create lasting change for people living in poverty, the statement added.

Women leaders from around the US and the world, including actress Joy Bryant (Parenthood), designer and HGTV host Genevieve Gorder, Mayor of Monrovia, Liberia Clara Mvogo, Virginia First Lady Dorothy McAuliffe, San Francisco Chef Emily Luchetti and others were in attendance at the awards ceremony, which took place at the House of Sweden as part of Oxfam America’s Sisters on the Planet Summit.

“Our world seems to be on fire these days, but out of devastating struggle rises hope, resilience, courage and determination. The human spirit of the Syrian people is strong and powerful, and one incredible and inspiring example is Majd Chourbaji,” said HGTV host and Oxfam America Sister on the Planet Ambassador Genevieve Gorder, who presented Chourbaji with the award.

Chourbaji co-founded a Syrian independent media organization in her hometown of Daraya and was arrested for her efforts along with her husband. After her husband’s death in jail, Chourbji fled Syria with her children. In January 2014, she founded Women Now in Lebanon, a center to administer support for Syrian refugee women. Last year, she founded the Small World School in the Bekaa in Lebanon for children of Syrian refugees in the country. The school now has more than 1,000 Syrian students.

“The mother-daughter duo of Fartuun Adan and Illwad Elman, have worked tirelessly for the protection of women and youth despite the many challenges thrown at them,” said actress and Oxfam America Sister on the Planet Ambassador Joy Bryant. “Not only do they make a huge difference in many people’s lives, they are also an inspiration for all of us.”

Fartuun Adan leads the Elman Peace and Human Rights Centre, an organization founded that carries on the legacy of her late husband and peace activist Elman Ali Ahmed. The organization helps counter and prevent violent extremism through its work on disarmament and disengagement of youth, as well as providing support for reintegration and rehabilitation. During a particularly horrifying spike in the conflict in 2011, when women and girls were regularly forced into ‘temporary marriages’, beheaded, stoned or shot to death, Fartuun and her daughter Ilwad Elman established Sister Somalia, the first rape crisis center in Somalia. The center has since expanded from Mogadishu to other regions and has established the first safe-houses for rape victims in Somalia.

“Tonight, we honor all the courageous women around the world who are fighting every single day to create a better life for their communities and a better world for all of us,” said Raymond C. Offenheiser, president of Oxfam America. “Tonight, we stand together with Fartuun, Illwad, and Majd against injustice. Together we aim right the wrong of injustice and poverty wherever it happens.”

Across the globe, Oxfam supports programs and organizations that focus on gender equality, legal reform, and ending violence against women.