“After five years of conflict, our groups want a just peace, not just a peace process,” they wrote 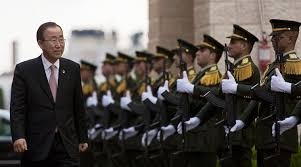 Twenty-four Syrian civil society groups enlisted by the United Nations to support peace talks threatened to quit Tuesday over the failure to halt fighting in the five-year war.

The non-governmental organizations wrote in a letter to UN Secretary-General Ban Ki-moon that the mounting death toll meant their presence at the peace table was “not only meaningless, it is unnecessary.”

Below is the full text.

We write to you on behalf of Syrian civil society organizations and humanitarian aid groups, who work to improve the living conditions of millions of Syrians and, wherever possible, save lives. Many of our representatives have participated in the intra-Syrian peace talks at your invitation and the urging of your Special Envoy for Syria. Despite our initial reluctance to engage in the political process, many of us chose to participate in the hopes that we could be the voice and champion of Syrians on the ground, who overwhelmingly want peace and protection. But after three rounds of peace talks, the Geneva process has offered our people neither peace nor protection. Instead, while we were asked to talk peace in Geneva, the civilians we represent were bombed in Syria.

The last round of Geneva talks was launched with a missile that killed Dr Hasan Al Araaj, the director of Hama health district, and the province’s last remaining cardiologist. The talks closed with a Syrian regime missile that targeted Al-Quds hospital, killing Dr Wassim Mouaaz, the last pediatrician in Aleppo, who served an estimated 40,000 children in the city. One day prior, a Syrian Civil defence base was hit by air strikes, resulting in the death of five rescue workers.

Your Excellency, throughout the Geneva talks, our members died digging bodies out of the rubble. They were bombed for providing education, food, water and medical care. In return, we were unable to offer them even the most basic protection. We could not even stop the killing of the doctors and rescue workers who we were invited to Geneva to represent.

First, the international community can protect civilians by enforcing Security Council resolution 2254 and all related resolutions that call for the protection of civilians and vital facilities. Indiscriminate aerial bombardment is the main cause of death in Syria. You can call on Member States to protect civilians from airstrikes, and demand efforts are taken to stop indiscriminate violence, including by establishing a no-bombing zone for all of Syria. This is what the Syrian people need, and it is what the international community has a responsibility and the capability to deliver.

Second, you can break the sieges across Syria by airdropping aid to provide medical care to civilians in need. On 17 May the ISSG agreed that the WFP would airdrop aid if access was denied to any of the designated besieged areas on June 1. Weeks later, airdrops have still not been delivered. Ground access remains limited. And more than 1 million Syrians remain under siege. The international community must be clear that airdrops must be provided to all areas in need – including but not limited to those designated by the ISSG. Given Assad’s history of denying access, airdrops should be delivered irrespective of Syrian regime consent. The WFP and all humanitarian organizations involved in the provision of airdrops should be protected by ISSG Member States. In all instances, airdrops should be provided intensively, regularly and continuously so that Syrians in besieged and hard-to-reach areas receive the food and medical care they need when they need it.

Third, you can make clear that war crimes will not go unpunished and that those responsible for the targeting of civilians, vital facilities and torture and detainment of tens of thousands of innocent people will be held accountable. We welcome your calls on the Security Council to refer the situation to the International Criminal Court. But given that such a referral appears unlikely, we appeal to you to call on Member States to consider a special tribunal on Syria or, in conjunction, to prosecute cases under domestic or universal jurisdiction. We also ask that you work to support the release of all arbitrarily held detainees. It is vital that you join our calls on the Security Council to adopt a resolution authorizing external monitors to access all detention facilities across Syria, including the secret military prisons where thousands have been tortured and starved to death.

Your Excellency, our presence and the presence of civil society organizations who are representing us within the framework of the intra-Syria peace talks was based on our ability to represent the Syrian civil society organizations, schools, teachers, hospitals and doctors who selflessly serve our communities. Many of us agreed to participate in the Geneva process because we wanted meaningful talks that would lead to a just peace, not just a process. But if the international community cannot even protect our ability to serve and assist Syrian society, our presence in Geneva is not only meaningless, it is unnecessary. If a serious mechanism to protect our civilians and enforce the cessation of hostilities is not developed and implemented, we fear it will be impossible for our organizations to continue our participation in the Geneva talks. After five years of conflict, our groups want a just peace, not just a peace process.

We have copied this letter to the Foreign Ministers of the United States, France and Great Britain–the powers that have the means to implement a policy aimed at protecting Syrian lives.

13. Syrian Center for Media and Freedom of Expression