129 Syrian NGOs issued a statement calling for protecting civilians in the city of Daraya, in the Damascus suburbs. Below is the statement as published: 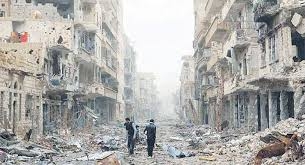 The city of Daraya in the Damascus suburbs has been living under a continuous siege for four years, under the brutal bombing by missiles, bombs, and air forces, which never leave the sky of the city. The Syrian regime and the militia supporting it, such as members of Hezbollah and Iraqi militia, are trying to control the entire city, and in the beginning of each campaign these militias start heavy shelling and narrow the siege on the trapped people

In the city of Daraya there are over 7,000 persons from the resident and native inhabitants of the city, and they are lacking the minimum necessities of life. In addition, they are living under criminality that the world has never seen before, without any presence of foreign terrorist organizations as the Syrian regime claims.

During the past few days, an aggressive attempt to break into the city has started. The Syrian regime forces accompanied by Hezbollah members were able to precede in the farmlands which are considered the main source of food for the siege people, and they arrive near the residential area where there is a large number of women, children and old people, which form a multiple risk on people's life there, in Daraya.

The Syrian regime is seeking to exterminate the remaining of the civilians as a part of its plan for ethnic cleaning and tampering with the demographics. The continuation of the world in this policy of silence against the crimes of the Syrian regime, and the absence of any deterrence against these violations in the human rights field, this makes the international system and the human rights organizations lose their credibility, also this reveals their complete inability to stop the daily crimes which are happening in Syria.

Maybe this will be the final appeal before it becomes too late, to the international society, human rights organizations, the international organizations such as the United Nations and the Red Crescent to move immediately to save people under the siege in Daraya and provide the security for them to continue their lives.