The opening of the "Foundation for Polygamy” in the town of Azaz, in Syria, was met with humor and outrage by Syrians over social media, especially since the region is witnessing a harsh economic crisis, according to al-Araby al-Jadeed. 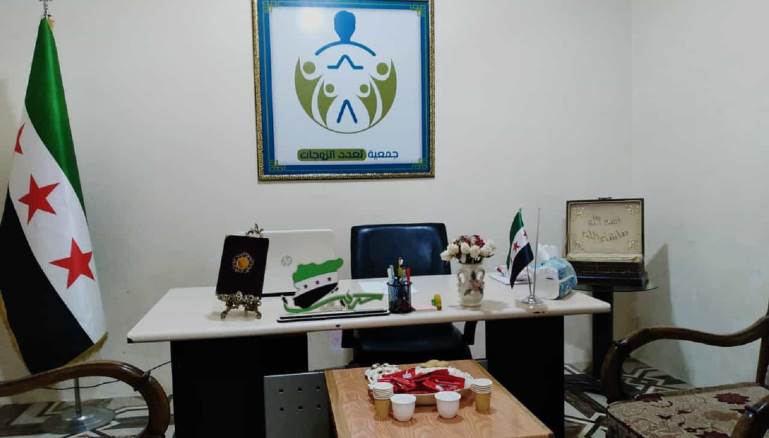 A picture purporting to show the opening of the “Foundation for Polygamy” in Syria, the province of Aleppo, was met with humor and outrage by Syrians over social media on Monday.

The office was reportedly opened the previous day and is licensed by the local council of Azaz, a city north of Aleppo under the control of Turkish-backed Syrian opposition elements.

The New Arab was unable to verify the registration of the foundation and the local council of Azaz did not respond when approached for comment.

Ahmad al-A’lwan, who first reported the foundation’s opening, said that it will “correct misconceptions of polygamy and defend it as a sharia concept which has been distorted by the enemies of Islam”.

The logo of the foundation is a man surrounded by four women, the maximum number of women allowed for Muslims to marry.

Syrians largely responded to the news of the opening of the foundation with derision and tongue-in-cheek humor.

Zaina Erhaim, a Syrian journalist and feminist, wrote a list of “suggested activities” for the foundation.

The foundation should “sign up women who want the opportunity to be a third or fourth wife … teach women how to please men, cook and manage the house… and give exercises in domestic conflict resolution”, Erhaim wrote on Facebook.

Other Syrians were more serious in their criticism of the decision to open the foundation.

No Liberators in Syria

“This is just what the people of Azaz and Idleb need, an association to support polygamy,” Walid Boni, a Syrian activist said on Facebook.

“They said they were liberators, but unfortunately in Syria, there are no liberators – all of Syria is occupied and ruined,” Boni said, referring to the opposition factions which control the area.

Azaz has been controlled by Turkish-backed Syrian fighters since 2016 when Islamic State extremists were expelled from the surrounding region.

A September report by Syrians for Truth and Justice found that local authorities in opposition-held areas of Syria had allegedly covering-up three cases of femicide.

One of the cases was a so-called “honor killing” carried out after a photo of one of the victims without a hijab circulated on social media.

Northern and northwestern Syria host over 2.8 million Internally Displaced People (IDPs), over half of whom live in tents or other inadequate shelters.

Over 97 percent of the population in northwest Syria lives under the poverty line, and Syria’s ongoing economic crisis has increased food prices by over 200 percent in recent months.