The BBC admitted that the documentary on an alleged chemical attack in Douma contained serious inaccuracies and false allegations, according to SANA. 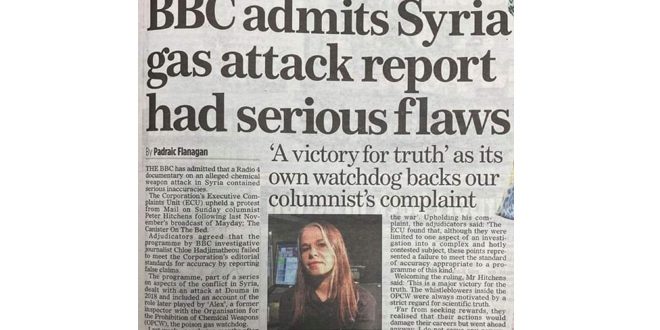 The British Broadcasting Corporation (BBC) has admitted that the Radio 4 documentary on an alleged chemical weapon attack in Douma contained serious inaccuracies and false allegations.

The Daily Mail British Newspaper said that the BBC admission of this mistake came after the Corporation’s Executive Complaints Unit (ECU) upheld a protest from the journalist Peter Hitchens, noting that according to the adjudicators, the documentary prepared by BBC investigative journalist Chloe Hadjimatheou, has failed to meet the Corporation’s editorial standards for accuracy by reporting false claims.

BBC correspondent, Riam Dalati, had confirmed in several tweets in 2019 that his investigations, which lasted for months about the scenes that were claimed to be filmed in the Douma City Hospital in Eastern Ghouta, the day of the alleged chemical attack, have proved that they were just a play, and that is a new confirmation of the reality of the international misleading campaigns that Syria has been exposed to.

He added that sarin gas was not used in Douma city and that everything was said about an attack with sarin was fabricated in order to have the greatest possible effect.

The journalist said that the documentary, part of a series on aspects of the war in Syria, was quoted by a person called ‘Alex’, a former inspector with the Organization for the Prohibition of Chemical Weapons (OPCW), as saying that an attack, with chemical weapons, took place in Douma in 2018.

Later the Corporation’s Executive Complaints Unit (ECU) concluded that the BBC was wrong, and the latter admitted that it had no evidence to back up Alex’s claims that the attack took place in Douma.