A group of jihadists has claimed responsibility for the bombing of a military bus in Damascus, that was carrying republican guard officers, according to al-Souria Net. 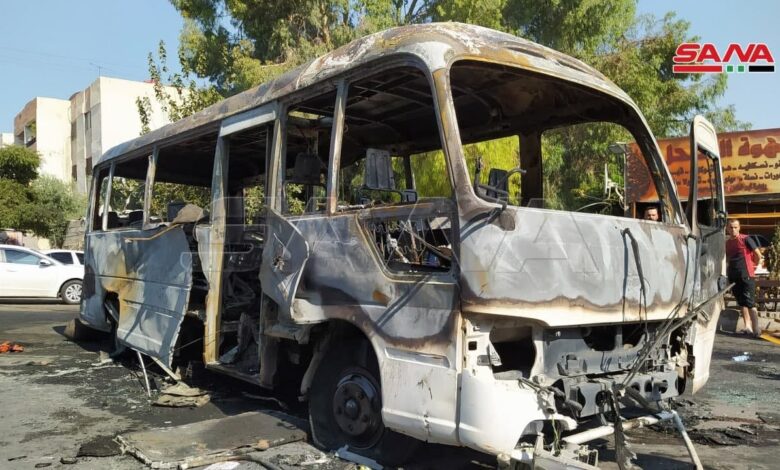 Jihadists from the al-Qaeda-linked Guardians of Religion Organization claimed responsibility for the bombing of a military bus belonging to Assad’s forces in the capital, Damascus.

On Wednesday, the group issued a statement saying that the bombing was in response to the regime’s escalation in the Daraa governorate. The statement noting that the bus was carrying Republican Guard officers in Damascus, without giving further details.

“A company of your brothers from the Guards of Religion Organization blew up a bus carrying Republican Guard officers in Damascus. This attack forms part of several invasions of al-Usra, and in victorious retaliation for our brothers in Daraa,” the statement said.

This morning, the regime news agency SANA announced that an explosion had taken place inside a military bus, at the entrance to the Guard’s residences in the capital, Damascus. According to the report, the explosion killed one person (the bus driver) and injured three others, without specifying whether they were military personnel or bystanders.

Read Also: The Syrian Badia Returns to the Forefront: Did ISIS Rebuild its Forces?

According to the regime’s account, the explosion was caused by a “short circuit” that caused the bus’ fuel tank to explode, catch fire, and incinerate the entire bus.

While regime officials did not issue any official statements, activists on social media questioned whether the explosion of the military bus overnight was caused by a short circuit. The activists speculated that the regime was trying to hide facts about the explosion’s cause, as well as the number of dead and wounded.

The Assad regime did not comment on the statement issued by the Guardians of Religion Organization, in which it claimed responsibility for the incident.

It is important to note that the Guard’s residences in the Dummar project include elements of the Republican Guard, affiliated with al-Assad’s forces, also called Al-Areen neighborhood, and it is surrounded by several military barracks.

The Guardians of Religion Organization is classified as a terrorist organization. It was established in February 2018 after the disintegration of the original branch of al-Qaeda in Syria, and formed with Ansar al-Din front and Ansar al-Islam front the Rouse the Believers Operations Room.

The bombing of the bus in Damascus is the first claimed operation of these jihadists in regime-controlled areas. It previously claimed responsibility for an attack on a Russian military post in the rural Raqqa area of Tal al-Saman, which falls under the Syrian Democratic Forces’ control. This is a remarkable incident that occurred outside the geographical area of the organization’s control.