The minister of Commerce has discussed with the president of Jordan's Chamber of Commerce trade relations between Syria and Jordan, according to al-Watan. 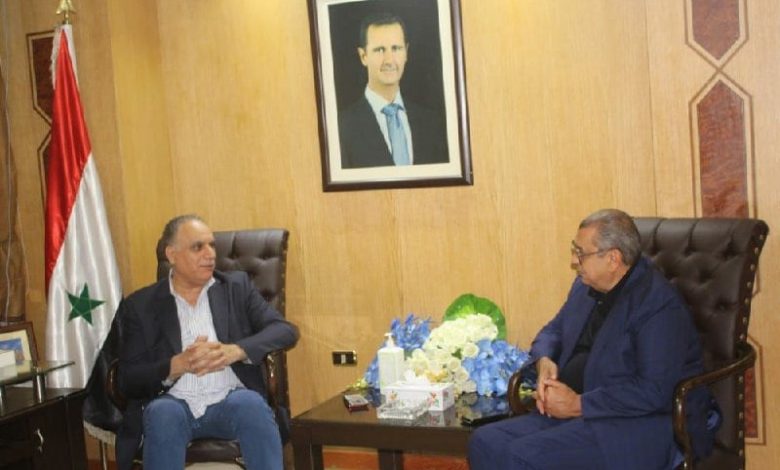 On Wednesday, Minister of Internal Trade and Consumer Protection Talal al-Barazi received Nael Raja al-Kabariti, the president of Jordan’s Chamber of Commerce, to discuss trade relations between Syria and Jordan.

During the meeting, the discussion focused on economic cooperation and trade relations between Syria and Jordan. It also covered how businesspeople and Chambers of Commerce members can develop and rejuvenate Syrian-Jordanian relations and open up new horizons, in the interests of both countries’ people.

Barazi stressed during the meeting that Syria is eager to nurture and support every activity or effort that contributes to revitalizing economic and trade relations, which can benefit the people of Syria and Jordan. Barazi stressed the importance of ongoing communication and meetings between businesspeople and economic actors in both countries, while also establishing economic projects and programs that contribute to bolstering bilateral trade. These initiatives should meet market demand for various locally produced goods, materials, and products in both countries.

Barazi noted that 600 Syrian companies have Jordanian business partners, while adding that the Syrian government is constantly working to create an environment for investment that ensures successful economic projects, which can further common interests.

As for Kabariti, he praised Syria’s new investment law and existing relations with the Union of Syrian Chambers of Commerce. He stressed the keen interest of Jordanian business people in developing economic relations with Syria and their desire to start investment projects and rejuvenate trade between the two countries.