A member of the People’s Assembly has complained on Facebook about not being given the opportunity to address the assembly, while another walked out in protest writes Sowt Al-Asima. 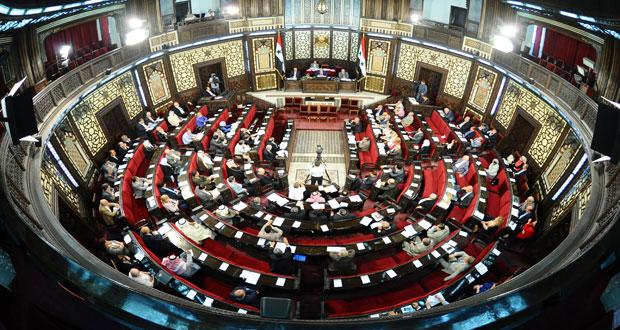 On Monday, some members of the People’s Assembly exhibited resentment during a session, and one of them published his grievances on Facebook. He complained that he had not been given the opportunity to speak during the session, while another withdrew from the session.

People’s Assembly member, Suhail Khader, said that his right to speak was violated, under the pretext of ensuring the precious time of the Syrian government is put to good use.

Khader said that “what happened in the People’s Assembly today resembles an episode in a comedy series.”

He added, in a post on his Facebook page, that the Presidency of the People’s Assembly had drawn up a list of names of members to speak before the government, and “our right to speak was confiscated”.

Kader, a member of what is popularly called the “Applause Council”, shared his grievance on Facebook, reiterating the issue of fighting corruption, which is the most prominent slogan in the narrative of regime officials.

Khader considered that the government is not serious when it comes to fighting corruption, or is unable to at the very least, and in both cases it can be considered party to it. He added that he has, “corruption files that I will present to the right minister, and if accountability is not upheld, I will ask to question the minister under the dome of the People’s Assembly.”

Damascus countryside Deputy, Ali al-Sheikh, entered into a verbal confrontation with the Speaker of the People’s Assembly, Hammouda Sabbagh, after the latter gave each deputy just one minute to speak.

Sheikh Qubbah left the People’s Assembly in protest against the number of deputies allowed to speak before the government, and the one-minute time limit.

Yesterday, the People’s Assembly began its second regular session for the third legislative round, with the governmental presence led by Prime Minister Hussein Arnous.