Heavy rains have flooded a multitude of refugee camps in Idleb province, forcing many families from their shelters reports Baladi News. 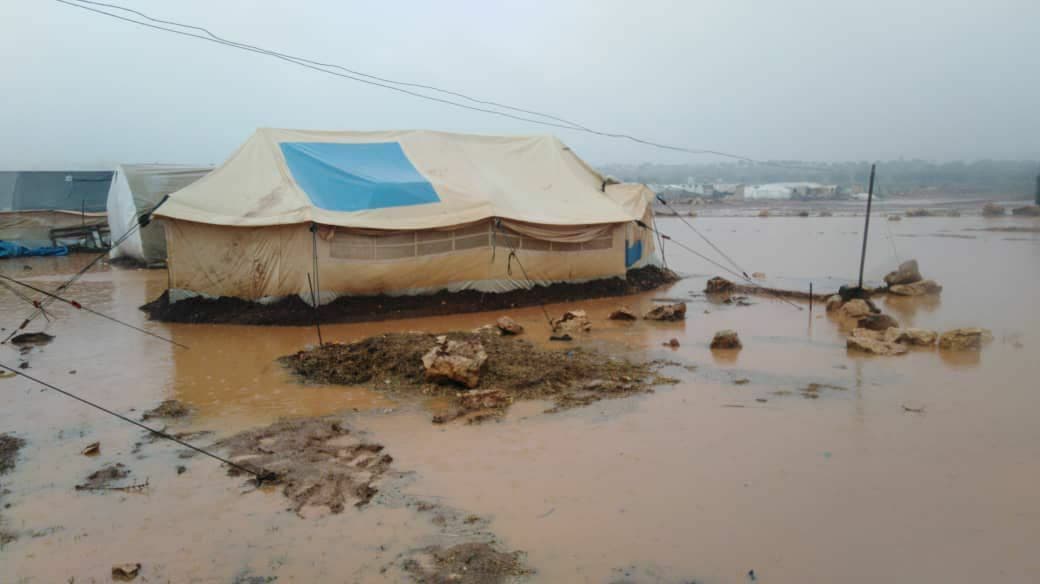 A strong rainstorm that struck all regions of northwestern Syria has multiplied the suffering of displaced Syrians, after hundreds of their tents flooded on Saturday night.

Baladi News’ correspondent in the Idleb countryside said that a rainstorm caused the sinking of about 40 tents in the Ghorbal al-Sham camp, near the city of Maarrat Misrin in the northern countryside of Idleb. Camp residents appealed for shelter for the affected families who did not have a roof over their heads anymore, in light of the continuing rainstorm.

The correspondent added that many of the displaced persons’ tents in the Duwailah camp, west of the city of Kafr Takharim, north of Idleb, were destroyed due to flooding. He pointed out that the strong winds caused the uprooting of many tents in the camp due to its being located at a high altitude.

According to Baladi News’ correspondent, most of these camps were built on agricultural lands that turn into a mud swamp with the start of the rain season, noting that the roads are not paved and sanitation services are nonexistent.

There are dozens of camps for internally displaced persons from Hama, Aleppo, and Idleb along the Syrian-Turkish border. The displaced suffer from extremely difficult living conditions and poor services due to the weak response to their situation in that geographical area.

On Friday, the Response Coordinators Team said in a statement published on its official website that rainwater had damaged 23 camps in northwestern Syria during the past 36 hours, most of which were in the camps of Maarrat Misrin, central Idleb, and the western countryside of Idleb Governorate.