An attack on tankers carrying fuel has left nine people dead and others in hospital, following the incident on the Ethrayia-Salamyieh road writes SANA. 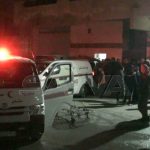 Nine civilians were killed and four others were injured in an attack launched by terrorist organizations against fuel tankers and a number of tourist buses on the Ethrayia-Salamyieh road.

Hama Governor Mohammad Tareq Kreashati, in a phone call with Syrian TV last night, said that at 9:30 pm, terrorist organizations targeted innocent civilians on the Ethrayia-Salamyieh road, as they attacked a convoy of fuel tankers and three tourist Pullmans for transporting passengers.

Kreashati added that the preliminary toll for the victims of the terrorist attack is nine martyrs and four wounded civilians, noting that with the help of the Syrian Arab Army, the rest of the passengers were transported to a safe area and the injured were rushed to Salamyieh Hospital.

Earlier SANA’s reporter said that six civilians were killed in a terrorist attack that targeted a bus near the Wadi al-Azib area in Salamyieh region in the Hama countryside, adding that their bodies were transported to Salamyieh National Hospital.

Terrorist cells from the remnants of the Islamic State terrorist organization spread in some areas in the Badia region, and they are backed by the US occupation forces, which occupy the al-Tanf area near the Syrian-Iraqi-Jordanian borders, and they launch terrorist operations in the areas which are adjacent to the Badia region, particularly on the roads and in residential compounds.

On Dec. 30, 2020, 25 citizens were killed and 13 others were injured in a terrorist attack that targeted their bus in the Kabajib area on the road between Deir ez-Zor and Palmyra.