All parties to the Syrian Constitutional Committee have submitted documents outlining their visions for the future, as the latest round of talks came to an end reports Asharq Al-Awsat. 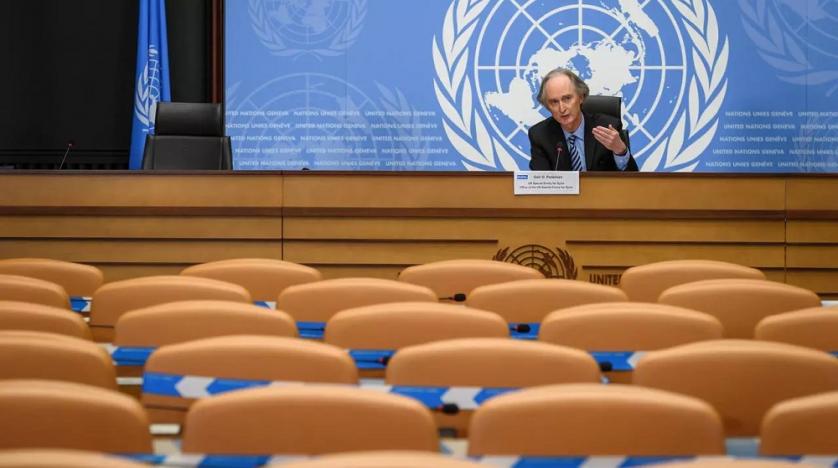 Both the Syrian government and opposition have submitted to the Constitutional Committee meetings in Geneva detailed documents of their vision for the country amid the conflict and foreign meddling.

Head of the government delegation to the Geneva, Ahmed al-Kuzbari submitted the two-page eight-point document, a copy of which was obtained by Asharq Al-Awsat.

The document is more detailed and hardline than previous submissions. It includes demands for the opposition High Negotiations Committee (HNC) to reject “acts of terrorism,” as well as “economic terrorism.” It also shed ISIS and the Muslim Brotherhood in the same terrorist light, while condemning “foreign Turkish, Israeli and American occupation,” omitting any mention of Iran and Syria.

The fourth round of the Constitutional Committee talks involving government, opposition and civil society representatives concluded on Friday. The fifth round is set to convene in January.

During previous rounds, United Nations envoy Geir Pedersen managed to reach a written agreement between members in November that the fourth round would discuss “national foundations and principles”.

The government delegation sought for these discussions to be held without a set deadline, while the HNC wanted talks to begin on the introduction of the new constitution.

The document submitted by Kuzbari on Thursday went into detail in explaining the “national foundations and principles”.

The first point underscored the ongoing fight against “all forms of terrorism”. It “vehemently rejected all forms of terrorism committed by terrorist groups, including ISIS, al-Nusra Front, the Muslim Brotherhood and their affiliates throughout Syrian territory.” It also rejected “the terrorism practiced by some countries against the Syrian people, including economic terrorism and unilateral measures” – meaning western sanctions – and demanded compensation for the ensuing losses.

The second point condemned “foreign occupation of Syrian territory by Turkey, Israel and the US and efforts to end it through all possible means.” It also sought to criminalize “any collaboration or recognition of occupying forces and calls for foreign intervention.” The document made no reference to the Russian and Iranian presence in Syria, which Damascus says was based on its request.

The third point called on participants at the Geneva talks to “support the Syrian Arab Army through all means in order for it to carry out its duties.”

The fourth point “rejected the separatist or semi-separatist agenda and attempts to impose a status quo on the ground.” This can be achieved through the “complete rejection of any political or military move that harms Syria’s territorial integrity.” The separatist or semi-separatist agenda can be thwarted by “rejecting any academic, educational, cultural, social, political or military measures” that serve such goals. It also criminalizes groups and organizations that support separatism, which is understood as a reference to the Kurdish autonomous administration that controls a quarter of Syrian territory in the northeast.

The fifth point tackles “national identity as the common crucible for all Syrians, rising above religious, sectarian, regional, tribal or racial affiliations.” This is demonstrated through “the name of the state that is the Syrian Arab Republic; the official language, which is Arabic; the sense of belonging to and defense of the nation; the general sense of a person’s total belonging to national soil; and refraining from violating national symbols, such as the national flag and anthem.”

The sixth point calls for the need to “protect cultural diversity given its role in boosting national unity.” The seventh point focuses on “encouraging refugees to return home through possible means and ensuring this right.” It rejected “the practices of some parties and governments in obstructing this return under weak excuses and linking them to political agendas.” It also called on the international community to support the Syrian state’s efforts to prepare the necessary conditions for the return of the refugees.

The eighth article covered the “humanitarian file” through demands that it be addressed through “international efforts that can ease the humanitarian suffering of the people and that was caused by the systematic terrorist war that has been imposed for ten years.” It also rejected the “political exploitation” of this issue.

Syrian Center for Policy and Research estimated that nine years of war in Syria have cost some 530 billion dollars, destroyed 40 percent of the country’s infrastructure and left poverty to spiral to 86 percent of the population of 22 million. The conflict has claimed the lives of 960,000 people, including 560,000 who were killed directly from the war. It forced 13 million out of their homes, while 2.4 million children are out of school.

Damascus’ document sparked heated debates between the government and opposition representatives, said sources in Geneva. The HNC urged the need to commit to the “Terms of Reference and Core Rules of Procedure” agreement of the Constitutional Committee. Pedersen’s team did not become embroiled in the debates and did not remind the gatherers of the “Rules of Procedure” even though he had underscored them during a Security Council briefing two months ago.

Some opposition members tried to steer the “discussion” towards the constitutional ideas and proposing tangible suggestions, such as forming an independent national committee that would tackle refugee affairs and forming another on human rights.

Sights will now be set on the fifth round of the Constitutional Committee talks, which will be held in January amid a transition in the American administration, whose candidates had pledged to “invest more” in the Syrian political process. Questions will then be raised on whether the discussions will come any closer to constitutional reform and pave the way for elections, in line with resolution 2254, especially with presidential polls set for mid-2021.

The Syrian opposition’s High Negotiating Committee (HNC) has submitted to Constitutional Committee meetings in Geneva a four-page document promoting a number of national principles as items that should be covered by the country’s constitution.

These values demanded that the political system in Syria takes the shape of a republic established on pluralism. Power must be delegated democratically and through voting. Political parties, in turn, must contribute to Syria’s political scene while respecting the constitution and national sovereignty.

The fourth round of the Constitutional Committee talks involving government, opposition and civil society representatives concluded on Friday. The fifth round is set to convene on January 25.

During previous rounds, UN envoy Geir Pedersen managed to reach a written agreement between members in November that the fourth round would discuss “national foundations and principles”.

The HNC’s document, which Asharq Al-Awsat obtained a copy of, came as a response to an earlier document presented by the head of the government delegation Ahmed al-Kuzbari.

The government had demanded that the HNC rejects “acts of terrorism,” as well as “economic terrorism.” It also shed ISIS and the Muslim Brotherhood in the same terrorist light, while condemning “foreign Turkish, Israeli and American occupation,” omitting any mention of Iran and Russia.

Presented by the head of the HNC delegation Hadi al-Bahra, the HNC’s document stressed that Syria is an independent, civil, democratic, and fully sovereign state. It also underlined the territorial integrity of Syria, saying that the country was indivisible and that no part of its lands may be ceded.

In the document, Syria is mentioned as a founding member of the Arab League, the Organization of Islamic Cooperation and the United Nations and its commitment to the principles of good neighborliness is cited.

Syria, according to the document, is committed to restoring its sovereignty over the occupied Golan Heights by all legitimate means and in accordance with international law.