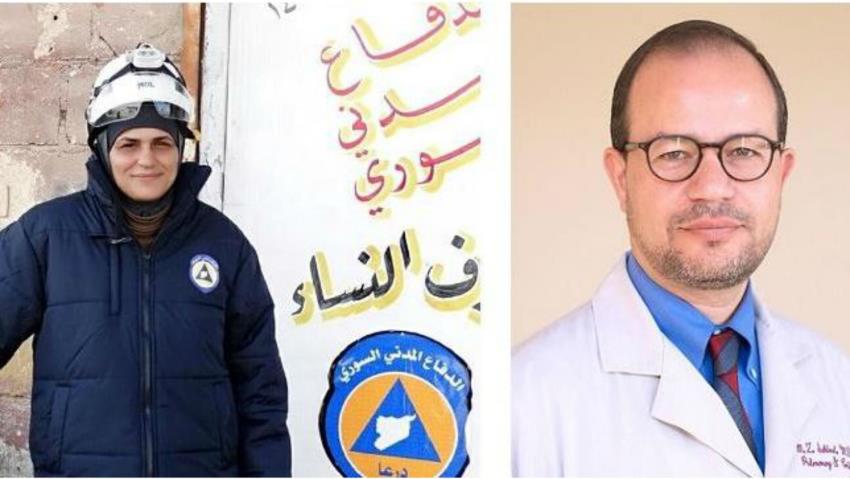 Two Syrians who defended their people against the brutal assault of the regime of President Bashar al-Assad and his Russian allies in non-combatant roles will to receive one of America’s top peace prizes in a virtual awards ceremony on Sunday.

Dr Sahloul served as the former president of the Syria-American Medical Society (SAMS), a non-profit global medical relief organisation that works on front lines of crisis relief in Syria.

The pulmonary specialist, who now fights Covid-19 in Chicago’s wards, is the president of Medglobal, a non-for-profit organisation similar to SAMS, which provides medical services for vulnerable people in 14 countries.

Al-Misry, from the southern Syria city of Deraa where popular demonstrations against Assad’s regime first began in 2011, is a former journalist.

Now living in exile in Canada, Al-Misry was a leader in the Syrian Civil Defence force, known as the “White Helmets”, which is a volunteer organisation that provides medical, evacuation and urban search and rescue in response to bombing.

The online awards ceremony will feature Orlando Von Einsiedel, the director of the Academy Award-winning documentary The White Helmets, who will present the award, along with prominent Palestinian American activist Linda Sarsour.

Stanley Heller, an adminstor for PEP told a Connecticut radio show that this year’s award recognised the “brave, humanitarian work for the people of Syria”, which continues amid mass Covid-19 outbreaks across the country and renewed Russian bombing in the northwest.

PEP board members’ decision was driven by a desire to reorient the “peace movement and the Left on an issue where many progressives have gone astray”, the organisation said in an online statement.

“Most [of the peace movement] have ignored the agency of Syrians and their efforts for a democratic uprising, one that has been met by incredible violence and influenced badly by foreign powers, but which still remains active whether hidden in Deraaa and Idlib or alive among refugees around the world” the statement added.

Recipients of the Gandhi award are “distinguished by having made, over a period of years, a significant contribution to the promotion of an enduring international peace…achieved through cooperative and non-violent means,” the PEP’s website adds.

Syrian health workers and medical workers have found themselves on the receiving end of systematic, targeted attacks throughout the country’s civil war.

According to Physicians for Human Rights, 923 medical professional have been killed in Syria from 2011 to March 2020, which 91% of killing being committed by Syrian government forces and their Russian allies.

The medal for the award is made of peace bronze, an alloy composed of disarmed and recycled nuclear weapons, and comes with a $5,000 cash prize to be shared between Dr Sahloul and al-Misry.

This year’s ceremony, which will be held via Zoom is free and open to all and starts at 1pm Eastern Time (6pm GMT).

Notable past recipients of the medal include Eleanor Roosevelt, Cesar Chavez and BDS co-founder Omar Barghouti.