After reports by SANA on the death of four US soldiers, the US military has denied the allegations, describing them as false reports Al-Araby Al-Jadeed. 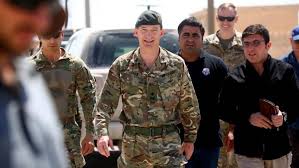 The US military has denied suggestions made by Syria’s national news agency that four American soldiers from an anti-Islamic State group force were killed in a blast in Syria.

Colonel Wayne Marotto, the spokesperson for Operation Inherent Resolve (OIR) – the US military campaign against the IS in Iraq and Syria – said in a tweet that the report promoted by the Syrian regime was “false”

The Syrian Arab News Agency (SANA) said the explosion took place in northeastern Syria’s Hassakeh district and indicated that American troops were killed in the blast.

Citing ‘civil’ sources, the report claimed that a vehicle carrying US soldiers transitting between Hassakeh and Deir Al-Zour when the bomb blast happened on Sunday, resulting in four casualties in its ranks.

The report also claimed US troops rushed to the scene in Markada after the explosion with planes sighted hovering over the blast site.

While SANA did not specify if the dead were members of the OIR, Marotto said on Twitter that none of its service members had been ‘killed in action’, refuting the recent report.

“The report of @CJTFOIR [International Coalition for Operation Inherent Resolve] service members KIA [killed in action] in Syria today is false. All @CJTFOIR service members have been accounted for,” Marotto said on Twitter.

The Syrian regime is pushing for the withdrawal of all US troops as part of negotiations to release American hostages.

The OIR does not disclose the exact number of servicemen and women deployed tp Syria but the US force is thought to number around 500.

Most US troops in Syria are based in the northeast, providing critical support to Kurdish and Arab tribal forces fighting the remnants of the Islamic State group.

Convoys routinely patrol the region and have bumped heads with Russian troops who are also present but back Syrian President Bashar Al-Assad.

The OIR has previously lost four of its American soldiers in Syria in what it said were “noncombat incidents”, including a rollover accident in Syria in January.