The famed Khan al-Harir market has seen the first phase of restoration completed, with the exteriors completed in keeping with the original style reports Al-Watan. 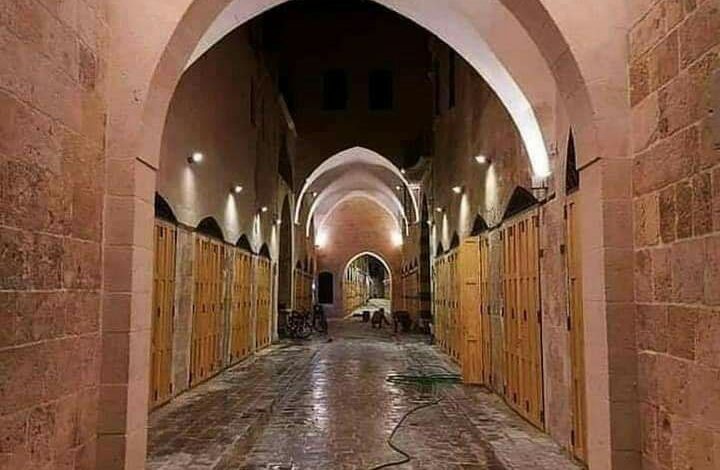 Khan al-Harir, the most prominent and oldest historical monument in the ancient city of Aleppo, has regained some of its splendor and beauty after the first phase of rehabilitation and restoration works of its ancient market area.

Khan al-Hariri was destroyed by terrorist groups in July 2012. Restoration works were a joint effort between the Syrian Trust for Development and the Aga Khan Foundation, under the supervision of Aleppo Governorate and the Aleppo Municipal City Council.

Khan al-Harir is one of the most important ancient khans in Aleppo. It houses shops and establishments for the trade and sale of textile, silk, and various types of fabrics made locally in Aleppo, and has been known for this type of industry for a long time and is the capital of Syrian industry and trade.

A source in Aleppo told Al-Watan that the restoration work of the market, after the success of the rehabilitation of the adjacent al-Saqati Market, took more than 10 months, and included 60 shops extending over 140 meters. Restoration work included the exterior of the market — the building walls and facades. The walls were cleaned, doors were installed, and the rest of the market parts were maintained according to their original archaeological model and shape.

The source emphasized that reviving this vital and important market, “constituted a technical and logistical challenge, due to the nature of the archaeological site and the devastation it was subjected to, the many cracks in the stone facades, the accumulation of rubble, and the encroachments that contributed to the distortion of the site.”

He added, “The rehabilitation work respected the archaeological conditions outlined by the Directorate-General of Antiquities and Museums. The rehabilitation relied on craftsmen, experts, and skilled workers from the people of Aleppo, who worked in accordance with local and international standards and conditions for rehabilitation of historical cities, in compliance with UNESCO standards for sites on the World Heritage List.”