The ten year-old Syrian girl Enar, who used social media to document the horrors of the conflict in Syria has been nominated for the 2020 International Children's Peace Prize reports Al-Araby Al-Jadeed. 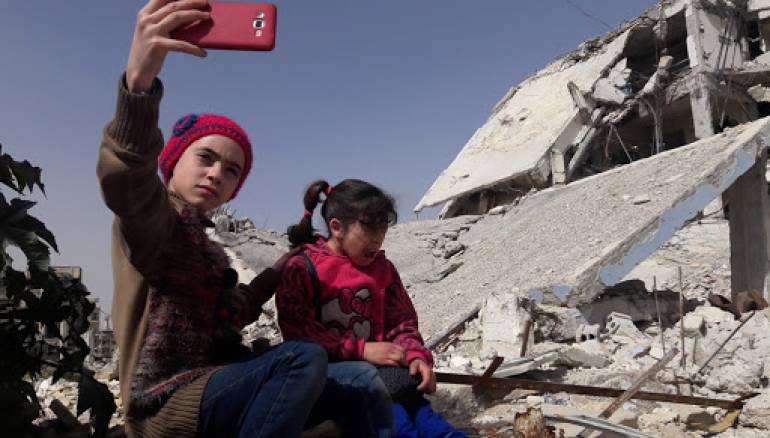 A Syrian girl has been nominated for the 2020 International Children’s Peace Prize.

The girl, identified only as Enar and also known as “Noor” on social media, played a major role in raising awareness of the suffering of the people of the Ghouta area near Damascus during a years-long siege.

She was only 10 years old when she began to film and publish video reports in Arabic and English about life in Ghouta.

The Syrian Network for Human Rights (SNHR) said on Monday that it had nominated Enar for the prize in coordination with the KidsRights foundation, and that the nomination had been accepted by the prize committee.

A total of 142 children from 42 countries have also been nominated for the prestigious prize.

“Enar, who was 10 years old when she first began her reports, along with her younger sister Alaa, then 8 years old, filmed and broadcast a large number of photos and videos, in which she spoke not only about the suffering and deprivation that she and her family were exposed to, but also about those to which society as a whole was exposed in Eastern Ghouta,” a statement from SNHR said.

The Ghouta area near Damascus was one of the main centres of the 2011 Syrian uprising against the Assad regime. Enar and her family moved to the area from Damascus city in March 2011.

The uprising soon developed into an armed conflict and the Syrian regime imposed a crippling siege on the area between 2012 and 2018.

Enar reported on daily regime bombardments and the use of barrel bombs and chemical weapons. She was a witness to the August 2013 chemical attack on Eastern Ghouta in which approximately 1,400 people, including at least 99 children, were killed by the regime.

In her videos, she called on the United Nations and the international community to protect the civilians in Ghouta.

Ghouta however, was captured in April 2018, following a sustained campaign of aerial bombardment by the regime and its ally Russia. Enar and her family were forced to evacuate to Idlib province, the last remaining area of Syria held by anti-Assad rebels.

Despite the unimaginable suffering and danger she witnessed though, SNHR said that Enar’s videos were “not entirely without smiles and expressions of innocent childhood joy”.

Over 500,000 people have been killed and millions more displaced internally or externally since the Syrian conflict began in 2011, mostly as a result of regime bombardment of civilian areas.