President Assad addressed the newly elected People's Assembly to discuss the ongoing situation and the sanction imposed on the country, but also had to excuse himself during the speech because of ill health. 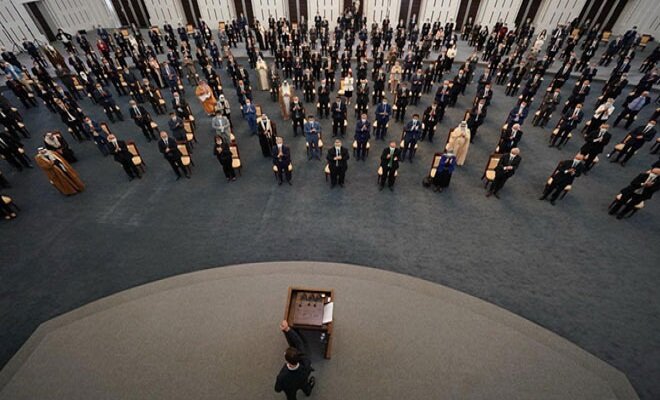 On Wednesday, Syrian President Bashar al-Assad addressed the newly elected People’s Assembly. While he was speaking he felt unwell and had to excuse himself for a while, before returning and completing his speech.

Assad told the MPs, “My blood pressure has dropped and I need to drink water.”

Shortly afterwards, he said, ”I need to sit for a minute if you don’t mind,” before exiting the huge hall.

It was not clear how long he was absent for, but when he returned, Assad, a trained ophthalmologist who is not known to have any specific health condition, joked that “doctors are the worst patients.”

“I haven’t eaten since yesterday afternoon. I have no sugar or salt and this happens,” he added.

The presidency’s Facebook page said in a post that the speech would be aired later on Wednesday. It did not provide further details.

The newly elected parliament has face heavy criticism for the way election were run and the results it brought.

Below is the Assad’s speech as published by SANA:

President Bashar al-Assad said on Wednesday  that the people’s Assembly elections is a historic stage of the war phases that our people wrote their details through their electoral pens and their will.

The President added that the elections you lately run were different, thus, in spite of coronavirus epidemic and its effect in the abstention of some people to take part in, there were multiplicity in the lists and a true competition, and this competition is a patriotic movement and any national movement is positive because it reflects the patriotic commitment.

The President added “We heard a lot of criticism about the people’s Assembly’s elections, and part of that might be true, but the most important positive side is to see our problems in a true manner.

President al-Assad added ‘We have to put into consideration that the victory in the war is not only by carrying it out military, economically or morally, but it also needs preparing for it through planning and organizing it.

“Regarding the organizing and the administrative side, it depends on right legislations which are the core of your Assembly’s work… It depends on the right legislations that organize the relation between the state’s institutions and between the citizens and establishments which create the justice and equal opportunities, thus they boost the national belonging to Homeland” President al-Assad added.

He added that the successful plans set off from strategic visions and your council has a central role in dialogue and it is an important bridge between the citizens and the Executive Authority.

The President affirmed that the war will not prevent us from assuming our duties, and the power of peoples is in adaptation with the conditions and subjugating them for their interests.

President  al-Assad added “any defect in the legislations affects the institutions , weakens the citizen’s confidence, and weakens the morals and destabilizes the situation  ..and both of the morals and stability are the core of the aggression on Syria and at the same time they are the core of defending it, especially that this war, which is not traditional from the military side through bringing in hundreds of thousands of terrorists from other areas of the world, depended on the psychological side that aimed at destroying morals , self-defeat and later the free surrender.”

President al-Assad added that Caesar Act is not a separate state of what had come of the blockade stages that have caused a big damage to the Syrian people.

The president added that the “act” has some additional harm and there is a lot of psychological warfare in it.

President al-Assad went on to say that through the general context of war, whenever terrorists fail in their missions, there are an escalation, one time they go to the Security Council, another time they escalating in the chemical issue or they bomb our forces, and after the liberation of the west of Aleppo and the south of Idleb, the title was economic aggression to weaken the achievements of our forces’ victories, making them pale and without meaning for the Syrian people.

“The question about why the last Israeli strikes in Al-Badya and the surrounding areas coincided with the issuance of the act, the answer is that because they came to facilitate the movement of Daesh as their cells are positioned in Al-Badya region and its surroundings and they are not sleeping cells, they are active ones ,  and this is  another aspect of “ Caesar Act, “ so  it  is not only an act to impose economic sanctions, but it isalso a new stage of the escalation “ the president added.

The other side is to motivate the terrorists, throughout the past years, terrorists have lost trust in  their leadership and began to hand over the weapons and began to change their positions and lost hope to achieve something.

“The US needs terrorists in the region, on top, Daesh, and it wanted from Caesar Act to express its support to the terrorists,” the President said.

He added that the Israeli aggressions on Deir Ezzor came to facilitate the movement of Daesh terrorists.

President al-Assad said that responding to the blockade will be through production and self-dependence.

President al-Assad added that we have to remember that our standing by the army was the reason behind all its achievements and our support to the Syrian Pound will be the reason for its power.

The President affirmed that unlike what some people think, the circumstance now is appropriate to inject money, adding that the foreign capital is coward but the national one must not be so, otherwise the homeland will lose.

As for the factors that affect the Syrian pound, the President said they are known; the direct effect of the war that lead to slow down the economy by the destruction of infrastructure and a dramatic decline in investment, also the blockade that has prevented the import of essential necessary materials for the production process.

As for the measures applied by the institutions, the President affirmed that they aim at fixing the exchange price. But fixing the price or returning it to the best situation, this needs everyone’s cooperation because the Syrian pound is in everyone’s hands, not Justin the hands of institutions, and we have to the Syrian pound instead of abandoning it for the interest of other currencies.

He went on to say that deterrence is the last mean in combating corruption, adding “we are persistent in restoring the stolen public funds through the legal ways and institutions.

President aL-Assad said that”  urgent reforms in agricultural sector are able to give swift  and  wide results   more than any other sectors.

“Homeland can’t withstand while it’s being snapped by terrorists and looted by corrupters,” the President said.

The president reaffirmed that Golan remains in the heart of every honest Syrian, its status won’t be changed by the annexation decision of the government of a Zionist entity or an immoral US regime, and our right to regain it is inseparable from our right to liberate all our lands from terrorism.

He added that there is no difference between a local or imported terrorist, a Zionist soldier, Turkish or American one, all of them are enemies on our territory.