It has been announced that Major General Tariq al-Khadra has died aged 80, after a long career serving in the Palestine Liberation Army reports Al-Masdar. 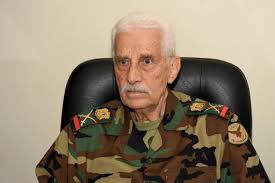 The Commander-in-Chief of the Palestine Liberation Army, Major General Tariq al-Khadra, passed away at the age of 80 in Damascus.

According to sources in Damascus, the long-time ally of the Syrian government passed away in Tishreen Hospital in Damascus, on Wednesday evening.

Khadra was born to a Palestinian family in the city of Safed (British Mandate of Palestine) in 1941.

The late general spend much of his childhood living in the coastal cities of Gaza and Haifa before the 1948 War displaced his family and forced them to travel on foot to nearby Bint Jbeil in Lebanon and eventually to Homs city in Syria.

He graduated from the Military College in Homs in 1962 with the rank of lieutenant.