Shortly after graduating, and while still wearing their uniform and holding the Syrian flag, soldiers from the Fifth Legion started to chant against Assad reports Baladi News. 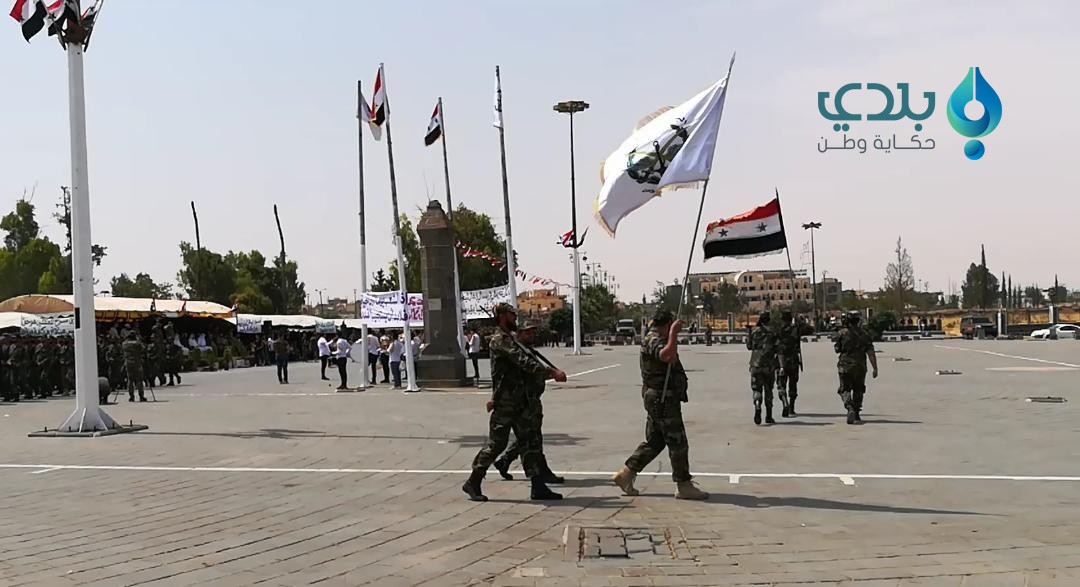 Hundreds of newly inducted members of the Fifth Legion chanted for the fall of the regime in Daraa today. They raised the regime’s flag and the army flag during the graduation ceremony of a military cohort, in the presence of Russian forces.

This makes for a strange contradiction that southern Syria has been experiencing since the settlement agreement in July 2018.

A Baladi News correspondent said that the Eighth Brigade in the Fifth Legion, led by Ahmed al-Awda, had graduated a 900-fighter military cohort as part of a military formation in Busra al-Harir east of Daraa.

The correspondent added that a military parade was held in the presence of officers of the Russian military police and leaders of the Eighth Brigade, in addition to a number of notable figures from Daraa.

According to the correspondent, at the end of the military parade, the graduating fighters chanted against the Assad regime and for the removal of Iran and the Lebanese Hezbollah from all Syrian regions. All of that happened while the fighters were raising the regime flag and wearing its official uniform.

On Jun. 23, 2020, Ahmed al-Awda announced his intention to form a unified military in Daraa, adding that “the army’s mission is not only to protect Horan, but rather to be the most powerful entity to protect Syria.”

The announcement was made in a speech in which Awda presented his condolences for the passing of the Fifth Legion members who died in an explosion that targeted a bus that was transporting them east of Daraa, amid accusations that Iran’s intelligence was behind the incident.

Awda had made a presentation to some members of the Central Daraa Committee at the beginning of June, during which he went through a list of the names of the defectors and those who failed to serve in the military, with the aim of recruiting them in the formation he heads.