Coronavirus is spreading in the Damascus countryside, as two judges and two legal assistants tests positive, and re-imposing the lockdown is considered writes Sowt Al-Asima. 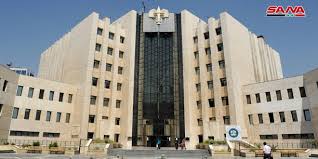 On Sunday, the Ministry of Justice in the Syrian regime government announced four coronavirus infections among judges and legal assistants in the Palace of Justice in Damascus.

The Ministry said in a statement that two of the judges who work in the Palace of Justice were infected with the coronavirus, as well as two legal assistants, who were placed under surveillance. The statement did not mention their health status or if they had been quarantined.

In light of the events, the Ministry instructed the judges in the Palace to wear rubber masks and not to hold stationery, in addition to sterilizing offices and processing requests submitted by lawyers and citizens while taking precautions, and to keep a distance of one meter when interacting with anyone.

Coronavirus infection rates have increased, according to official statements, to 417, while the number of deaths reached 19, and those recovering, 136.

Private sources revealed to Sowt Al-Asima information about discussions held two days ago by the Syrian government, with the governmental team in charge of taking coronavirus-related decisions in Syria. Discussions revolved around re-imposing a partial lockdown on all governorates under the control of the Syrian regime, especially the Damascus countryside, where more than 70 infections have been recorded since the beginning of July.

The private sources confirmed to Sowt Al-Asima the spread of the virus among members of the leadership of the Damascus countryside branch of the Baath Party this month. The Damascus Rural Health Directorate transferred a member of the leadership of the Damascus countryside Baath party and the head of its economic office, Essam Khraibeh, from the town Zakia, in the western countryside of Damascus, to the Quarantine Center in the National Hospital in Qatana, after confirming that he was infected with the virus, due to contact with a patient during a meeting in the capital. Khraibeh’s family was placed on house quarantine pending their test results.