Muwafaq al-Dawah is accused of being a prominent militia leader and participating in the rape of women from the Yarmouk camp in the al-Bashir Mosque writes Zaman Al-Wasl. 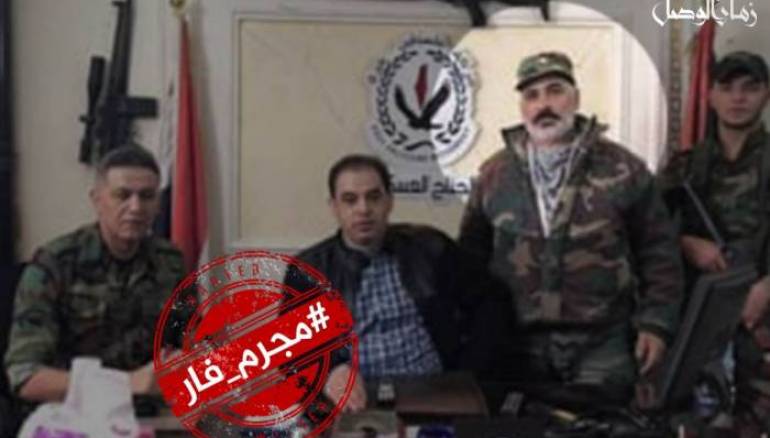 Muwafaq al-Dawah, Palestinian-Syrian militant based in Germany is suspected of committing war crimes and crimes against humanity in Syria. He was one of the most prominent leaders in the Popular Committees of the Popular Front for the Liberation of Palestine – General Command (PFLP-GC).

According to the sources, Dawah, who was living in the Yarmouk Refugee Camp, south of Damsacus, participated in the rape of women from the Yarmouk camp in the al-Bashir Mosque, as well as in the Ali al-Wahsh massacre in which dozens of demonstrators were killed and arrested, and hundreds were disappeared. He was directly responsible for firing an RPG at civilians in Yarmouk camp during the distribution of humanitarian aid, and starving the residents of the camp as well as bombing and destroying the area.

Dawah was one of the most dangerous leaders of the Palestinian militias, eye-witnesses said.

After the outbreak of the revolution, Dawah, along with Abu Mohamed Sarriya, a senior militia commander, participated in attempts to suppress protests in the neighborhoods of Attadamon, Zahira and al-Midan south of the capital.

According to an eye-witness, who spoke on condition of anonymity, “Dawah was one of the first people to join Ahmed Jibril’s militia, leading one of the groups that worked to suppress demonstrations in Yarmouk, Hajar al-Aswad, and Yalda, in addition to participating in the battles against the Free Syrian Army factions in the region.”

Another witness said that Dawah was one of the leaders of the fighting groups in the military wing of the Free Palestine Movement, al-Aqsa Shield Forces led by Saed al-Abdel, which was confirmed by the photos obtained by Zaman al-Wasl’s investigation team in which Dawah and his group appear with the flags and slogans of the militia behind them.

According to the witness, Muwafaq al-Dawah is accused by Yarmouk’s residents of the rape of the women of the camp in the al-Bashir Mosque, which was documented by Action Group for Palestinians of Syria, and other crimes.