The Chief of the Staff of the Armed Forces of the Islamic Republic of Iran has promised to upgrade Syrian air defences and work to improve the military writes Al-Masdar. 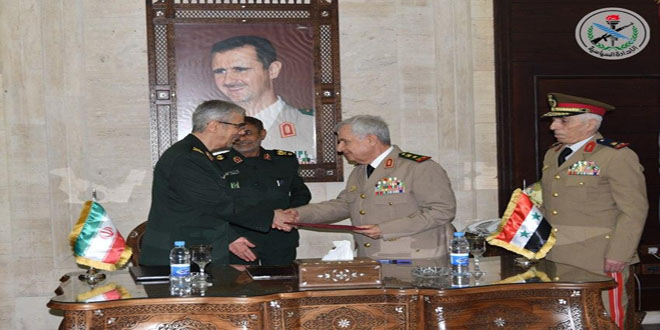 Iran and Syria have signed a new military cooperation deal that seeks to bring the two allies closer through their armed forces.

According to Al-Mayadeen TV, Syrian Defense Minister Ali Abdullah Ayoub and the Chief of the Staff of the Armed Forces of the Islamic Republic of Iran, Mohammad Bagheri, signed an agreement to expand military cooperation on Wednesday.

The agreement emphasizes the expansion of military and security cooperation in the field of armed forces activities and the continuation of coordination.

An Al-Mayadeen correspondent reported that in today’s conversation, both sides discussed the situation in Syria and the need for the withdrawal of foreign forces that entered the country illegally.

“If the US government could have brought Iran, Syria and the resistance to its knees, it would not have hesitated for a moment,” Ayoub said.

“The Caesar Act prevents Syrians from providing food and medicine to their children,” he said of the US sanctions against Syria. “We are trying to deal with the consequences of this law.”

In regards to the recent airstrikes on the Syrian Arab Army, Ayoub said, “Israel is a strong partner in the war against Syria,” pointing out that “terrorist groups are part of the Israeli aggression.”

He also stressed that the Syrian Arab Army will be victorious in the end, despite foreign efforts to prevent their success.

Bagheri said, “We [Iran] will strengthen Syria’s air defense systems in order to strengthen military cooperation between the two countries.”

In regards to the situation in northwestern Syria, Bagheri said, “Turkey has been a little late in fulfilling its commitments on the eve of the withdrawal of terrorist groups from Syria.”

“Turkey needs to know that its security problems can be resolved through negotiations and understanding with the Syrian side, not through a military presence on Syrian soil,” he continued.