An armed man opening fire inside a hospital has forced the Syrian Expatriate Medical Association to halt all non-urgent cases until safety can be assured writes Alsouria Net. 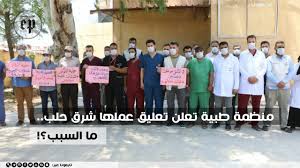 The Syrian Expatriate Medical Association (SEMA), stopped receiving non-urgent cases in all of its hospitals in the city of al-Bab in the Aleppo countryside for two days, after gunmen attacked one of its facilities.

The organization said in a statement that it will stop catering to non-urgent cases in all hospitals and health facilities under its supervision, while they figure out a way to deal with the matter and ensure the safety and security of the staff, so they are able to care for civilians and alleviate their pain.

SEMA revealed that one of the patients’ companions held a member of the nursing staff at gunpoint at dawn on Sunday. The attack took place in one of the hospital rooms of al-Farabi Hospital in al-Bab.

The perpetrator fired several bullets inside the hospital, then he went out, aimed his gun at the building, and shot again. No staff, patients or medical auditors were injured.

SEMA denounced the act, describing it as, “outrageous and potentially harming to medical personnel, patients, and beneficiaries in the hospital.”

Al-Farabi Hospital is considered one of the best hospitals in the fields of OB-GYN and pediatrics in the region.

SEMA asked local authorities, the Health Directorate, and local councils in al-Bab to ensure that such incidents do not happen again and that armed individuals do not access medical facilities.

Cases of armed attacks linked to factions within the Turkey-supported Syrian National Army have repeatedly occurred in northern Syria over the past years, despite organizations demanding the distancing of medical facilities and cadres from any armed conflict.

Security chaos in the Aleppo countryside is resulting in intermittent clashes among faction members, as well as repeated bombings, which the National Army accuses the Kurdish People’s Protection Unit and Islamic State sleeper cells of being responsible for.