US forces in Hassakeh failed to stop a Russian convoy that drove through their checkpoint, in the latest incident between the two opposing forces writes Al-Masdar. 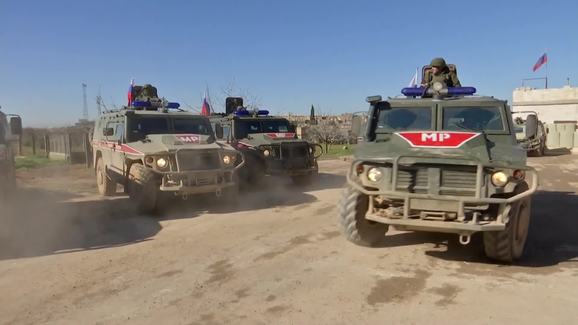 The Russian and US forces were involved in another skirmish in northeastern Syria after the former refused to stop at an American checkpoint in Hassakeh Governorate, while in Idleb, the Syrian Air Force reportedly destroyed a jihadist convoy that was traveling through the Jabal al-Zawiya region.

According to reports, the Russian military police convoy, consisting of eight vehicles, refused to stop at a US checkpoint along a road between the cities of Tel Tamr and Qamishli.

The US military responded by sending four vehicles to chase the Russian forces in an attempt to stop them from traveling through the village of al-Baydar in northwestern Hassakeh.

However, the US military was unsuccessful in their aggressive attempt to obstruct the Russian forces from continuing towards the city of Qamishli.

This latest incident comes just days after the Russian military committed a similar act, which resulted in a US military vehicle getting stuck along a road in the Hassakeh Governorate.

Despite the US’ withdrawal from several border points in northern Syria, they continue to maintain a presence in several areas in the Hassakeh and Raqqa governorates.

The reason for the US’ resurgence in these governorates is likely due to the Russian military’s wide-scale expansion into the northeastern region of Syria.

The Russian military has already established a large presence at Qamishli Airport, where they possess not only aircraft, but also air defense equipment.

Elsewhere, I Idlib reported that the Syrian Air Force targeted a convoy consisting of foreign jihadists from the Turkistan Islamic Party and the Hurras al-Deen group, as they attempted to travel between the towns of Deir Sonbol and al-Baraa.

As a result of this attack by the Syrian Air Force, several jihadists were killed and wounded, while a number of vehicles were destroyed.

This attack was reportedly carried out by the Syrian Air Force after their reconnaissance planes spotted the jihadist convoy moving from Deir Sonbol to al-Baraa last night.

Shortly after this strike, the Russian Air Force unleashed its most powerful attack since early March, as their warplanes targeted the jihadists in several areas around Idleb and Hama governorates.

Russian airstrikes were reported over the town of al-Baraa, as they attempted to weaken the jihadist base near the southern Idleb frontlines.