The campaign for better living conditions has continued in the southern province of Syria, with people denouncing corruption, security chaos and crop fires reports The Levant. 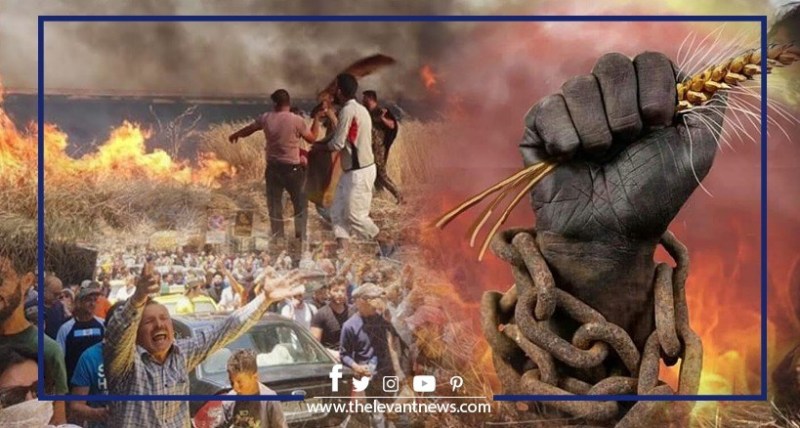 Many people underestimated the “We Want to Live” campaign launched by Suweida’s youth at the beginning of this year. Still, the campaign did not stop, even with the onset of the coronavirus, and was renewed in the past two weeks with silent sit-ins denouncing corruption, security chaos and crop fires. Demonstrators expressed their anger at authorities ignoring their demands.

On Sunday, those voices joined together in an angry protest that used slogans from the first days of the Syrian revolution. Crowds moved through the city’s central streets, eventually gathering in front of the governorate building, where they called for the exit of the regime and its leadership, which is now politically, economically and historically crippled—the same regime that is now unable to do anything to face deterioration on a scale that Syria has never seen before in its history.

The importance of Suweida’s protest is its timing. Anger is pervading in all areas under regime control, especially in the regime’s heartland cities along the Syrian coast that watched as the president and his relatives fought over looting what remains of the country after five decades of theft, which now reaches a climax amid complete economic collapse and paralysis. More than 90 percent of people in Syria are now living under the poverty line and that number is only growing. The authorities and their gangs are meanwhile fighting over a stolen country, which is being sold piece by piece to Russia, Iran and anyone else willing to buy on condition that the current authorities remain in place.

In addition to today’s demonstration, businesses in Suweida and most Syrian cities participated in a voluntary strike due to the unprecedented and accelerating drop of the pound against the dollar—the rate has reached 3,000 Syrian pounds to the US dollar. This deterioration has been reflected on general living conditions and the suffocatingly high costs for all necessities. If the determination of Syria’s sons in all areas and cities across the country meets that of the sons of Suweida that exploded today, a new page will turn in this deadly story. It is a story that has consumed everyone, without exception.

When the demonstration ended and disbanded without any friction with the security forces and police, security reinforcements were brought to the vicinity of the governorate building in central Suweida, as well as to the point where the protest broke out. Security officials also gathered together a committee to follow the latest developments.

The new governor of Suweida, Humam Dbeiyat, told al-Madina FM, “We are communicating with protestors to listen to their demands. There are those who are going outside of the general framework, and we are contacting relevant authorities to follow the matter.”

Protesters have vowed to continue the demonstrations, which are expected to escalate in all Syrian governorates. Change has become an urgent necessity, not merely a political demand. Rather, it is a daily need that now impacts everyone without exception. This regime has become an obstacle and frustration to any progress or breakthrough in Syria.