Another Syrian refugee has been identified as a pro-Assad fighter, who is accused of murder and rape writes Zaman Al-Wasl. 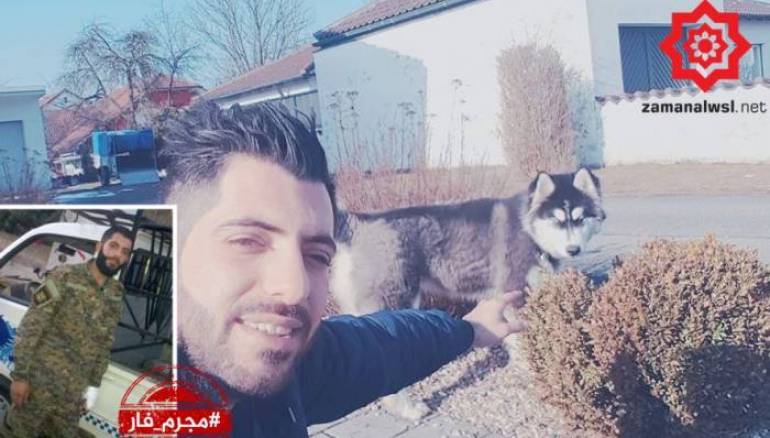 Syrian refugees, who fled the Syrian conflict to Europe, have found themselves surrounded by pro-Bashar al-Assad militias who obtained refugee status after concealing the war crimes they committed against the Syrian people.

Zaman Al-Wasl can reveal the identity of a new militant who applied for asylum in 2015 in Germany, according to Syrian refugees who recognized him.

Romeo Ibrahim was an active member in the notorious Tiger force, led by Brg.Gen Suhail al-Hassan.

Activists accuse Ibrahim of murder and rape and insist that his new life in which he is a peaceful dog owner, a wonderful father and a partier at nightclubs is nothing but a misleading cover for his true identity. Contact with victims that suffered directly from his criminal behavior has been made.

An activist, who preferred to remain anonymous, recounted that Ibrahim, who is, originally, from the town of al-Mushrifa, east of Homs, sought refuge in Germany in 2015, after four years of working with the shabiha militia, to later be joined by his wife and daughter on May 28, 2018, following the family unification law. He was a resident in the city of Straubing in Lower Bavaria, until he felt he was being closely watched and about to be uncovered. He, then, moved to the city of Gronau (North Rhine-Westphalia) where he is currently living.

Ibrahim joined the Tiger shabiha group to make a living. His father had died, making him the only provider in the family. Like all shabiha members, Ibrahim made sure to delete all evidence of his participation in the government militias from his Facebook page.

We were able, nonetheless, to obtain pictures of him from a private source. In one of them, he appears wearing the military uniform of the Tiger Forces, in another, carrying the relics of an explosive missile. In a third picture, he was holding an ammunition pouch in one hand and a weapon in another. And lastly, he appears leaning on a military vehicle.

In one of its reports, the popular and reputable German newspaper Bild, accused the German authorities of ignoring complaints submitted about the possibility of war criminals applying for asylum. The newspaper based its report on the response of the German Ministry of the Interior to a briefing request submitted by parliamentarians from the Free Democratic Party, which indicated that the matter is being handled by the German Agency for Immigration and Refugees Affairs, which referred to the public prosecution about 5,000 reports between 2014 and early 2019 containing acts criminalized by international law, along with about 2,000 reports submitted from other destinations.

The Syrian Center for Legal Studies and Research put on its website in June 2019 the prosecution services for war criminals, mainly shabiha members, who are residing in Europe. This action comes as a complement to the center’s work in pursuing war criminals and perpetrators of crimes against humanity, especially criminals who have arrived in Europe and got residency as refugees, or under any other form.

If you, reading this, believe to be one of Ibrahim’s victims, you can file a complaint against him and pursue him legally.