Fires have been raging across fields and crops in Syria, representing a devastating loss to the farmers and with no clear answer as to who is responsible reports Zaman Al-Wasl. 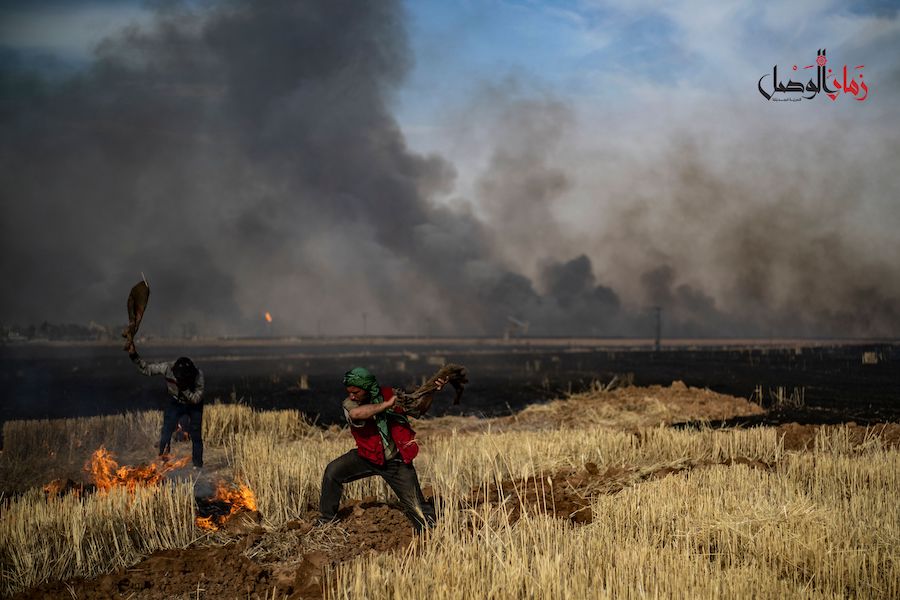 No sooner had the fire from Assad’s guns ceased than other fires raged, consuming the land and crops of the Syrians, which led some to suspect that the fires were deliberate and premeditated.

Throughout April and May, hundreds of fires broke out, devouring thousands of hectares of crops, forest lands and fruit trees. The authorities have not yet issued any exact assessment of the size and extent of the damages.

The different sides of the Syrian conflict exchanged accusations of who started the fires; however, the real victims here are the farmers who lost their livelihood for the season, during the ongoing economic crisis.

While media of all allegiances has covered part of these fires over the past days and weeks, major catastrophic fires were completely overlooked, such as those that erupted in the Palmyra forests and destroyed thousands of hectares.

Zaman Al-Wasl received recent aerial photographs that show the size of the losses. We commissioned a team specialized in accurate statistical study to give us a near-exact estimate of the size of the losses and damages, using hundreds of satellite images to measure and calculate the area of the affected fields.

In this report, we show some recent photos that show the moment of the eruption of the fires in some of the cultivated fields in different regions of the country:

A total area of 46,318 hectares was burned, which constitutes a catastrophic economic loss, whether on an individual level or over the country as a whole.

The size of the losses, the forested areas and fruit trees were excluded, based on the average production per hectare of wheat, was estimated at about 5,000 kg in the al-Jazira region, northeastern Syria.