In their recent report, the Syrian Network for Human Rights have documented the arrests made by all sides of the conflict, over the month of May reports Sowt Al-Asima. 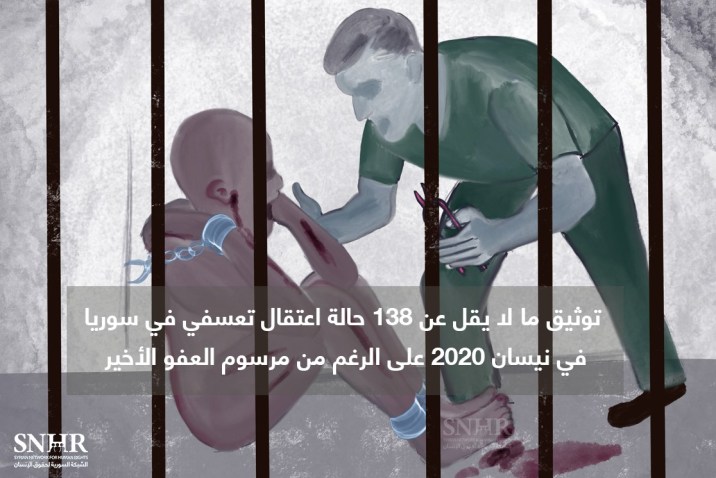 The Syrian Network for Human Rights (SNHR) published a report on Tuesday documenting 147 cases of arbitrary arrest in Syria throughout the month of May 2020.

In its report, the group said that the detainees included 10 children and four women, adding that there were 95 cases of “forced disappearance.”

According to the report, 64 cases of arrest were at the hands of regime forces, and they included seven children and one woman.

According to the report, the largest share of the arrests were in Deir ez-Zor governorate, then Raqqa and Aleppo. Many of the arrests happened without judicial warrants, and as the victims were passing through security checkpoints or during raids.

SNHR warned of increased dangers amid the spread of COVID-19, amid brutal conditions in detention centers, which are ripe for the spread of the virus. The lives of around 130,000 regime-held detainees and forcibly disappeared are under threat.

The group relied on piecing together information from numerous sources, including, “victims’ family members and members of SNHR in various Syrian governorates, as well as local activists, former detainees, and through communications with the families of detainees, forcibly disappeared people and survivors.” The aim was to gather the greatest possible amount of information and data, in light of extraordinary challenges.

SNHR recorded at least 138 cases of arbitrary arrest in April, with the regime responsible for 82 of the cases, including four women. The SDF meanwhile arrested 19 people, opposition factions in northern Syria arrested 26 (including two women), and Tahrir al-Sham arrested 11 people.