Displaced Idleb citizens return to their homes, Russia cargo ships head for Tartous, Hay'at Tahrir al-Sham swap prisoners with the regime and Syrian government shells Daraa village. Catch up on everything that happened over the weekend. 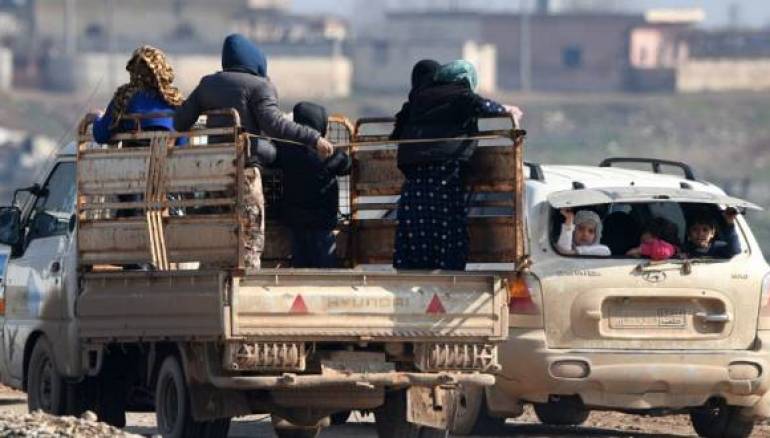 1. About 268,000 displaced people have returned to their homes in northern Idleb province since a Russian-brokered ceasefire was reached on Mar. 6, 2020, Syria’s Response Coordination Group said Friday. The local monitoring group has warned that constant ceasefire violations will endanger the lives of civilians and create a fresh wave of displacement in the region that hosts 3.5 million civilians, according to the United Nations.

2. On Saturday morning, a powerful explosion was heard in the administrative capital of Aleppo Governorate, a field source told Al-Masdar News. According to the source, the explosion took place around the defense factions in the Ramouseh District. The source said that the explosions were first thought to be from airstrikes on the Ramouseh District; however, they later ruled this out after investigating the scene of the blast.

3. Two Russian cargo ships are currently on their way to Syria’s Tartous to deliver weapons and supplies, several images revealed on Saturday. According to Al-Masdar News, in two separate posts on Twitter, maritime observer Yoruk Isik photographed the two Russian ships as they cross the Bosphorus Strait. The first Russian ship, the Project 1171 Black Sea Fleet 197th Landing Ship Brigade Tapir LST Saratov, is currently en route to the Port of Tartous after transiting the Bosphorus Strait that links the Mediterranean and Black seas.

4. On Saturday, a senior aide of the Iranian Foreign Minister, Ali Asghar Khaji, discussed with the Syrian ambassador in Tehran, Dr. Adnan Mahmoud, the latest developments in Syria and relations between the two countries. SANA reported that Khaji, according to an Iranian Foreign Ministry statement, confirmed the constant, “support of his country to Syria in its war against terrorism and the maintenance of a strategic cooperation between Iran, Syria and Russia in this area. It is necessary to continue holding consultations and joint cooperation between Iran, Russia and Turkey within the framework of the Astana track to politically resolve the crisis in Syria,” the Iranian diplomat said.

5. The Syrian regime and militant Hay’at Tahrir al-Sham group have engaged in a prisoner swap in northern Aleppo province, local activists said Saturday. According to Zaman Al Wasl, the regime army released three members of Tahrir al-Sham and a member of Ahrar al-Sham Movement. In return, the former al-Qaeda branch has freed an army colonel taken captive last year in Idleb province and a soldier who has been held captive since 2014.

6. On Saturday, the Syrian government forces fired artillery shells at the outskirts of al-Yadudah village, eight kilometers northwest of Daraa, southern Syria. Local sources reported to Smart News that the Syrian government forces stationed in the al-Sero checkpoint, north of the town of Athman, shelled the outskirts of al-Yadudah with four artillery shells.