Two men have been put on trial in Germany, accused of committing crimes against humanity and torturing detainees, in the first trial of its kind. 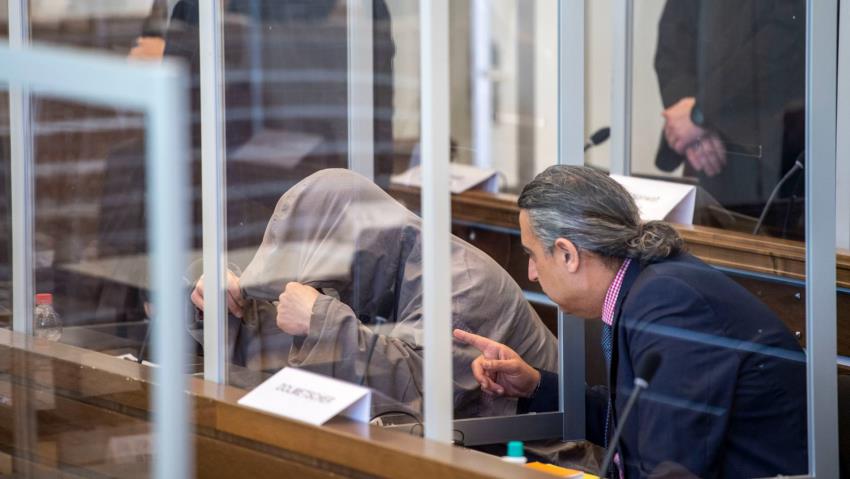 Prime suspect Anwar Raslan, 57, is allegedly a former colonel in the General Directorate of Intelligence, and stands accused of carrying out crimes against humanity while in charge of the al-Khatib detention center in Damascus.

The General Directorate of Intelligence is one of Assad’s worst detention centers where torture and violent interrogations takes place.

Fellow defendant Iyad al-Gharib, 43, is accused of being an accomplice to crimes against humanity, having helped to arrest protesters and deliver them to al-Khatib in the autumn of 2011. He appeared before the court in a grey hooded jacket, his face partially covered by a mask.

The Syrian Center for Media and Freedom of Expression (SCM) said it welcomes the start of the trials of Raslan and Gharib by the German courts as a first public and face to face trial of Syrian security officials.

SCM Director Mazen Darwish said in a statement, “Any political agreement in Syria that fails to realise justice in Syria will not produce a sustainable peace and a safe and voluntary return of refugees, nor substantial, lasting efforts to combat extremism.  We at SCM attend this trial today as a step on a long road towards justice which will, in turn, pave the way to a sustainable peace.

SCM assures that the aim is to send suspects to just trials which have all the guarantees and enable the victims to exercise their rights and let their voices be heard far from revengeful acts.”

The statement added that the trial is a new step on a long road, and a following up to former steps like issuing arrest warrants against Jamil al-Hassan in Germany and the arrest warrants against Jamil al-Hassan, Ali Mamlouk and Abdul Salam Mahmoud in France, and last, but not least, the arrest of Islam Allouch, a commander in Jaish al-Islam, and investigating him in preparation to try him for committing grave crimes against Syrians.

Anwar al-Bunni, a Syrian human rights lawyer and the Executive Director at the Syrian Center for Legal Studies and Research based in Berlin, said that Anwar Raslan had personally tortured him when Bunni was in prison years ago.

“In 2014 I came to Germany with my family and in the refugee camp in Berlin I saw the last person I imagined I’d see. It was Anwar Raslan, the officer who arrested me back in 2006 and the head of military intelligence at the notorious Branch 251 in Damascus,” said Bunni in a letter to The Syrian Observer.

He described the trial as a “historic day for countless Syrian survivors of detention and torture.”

According to Bunni, this is the first trial over state-sponsered torture in Syria. It will uncover a chain of command that leads all the way to Bashar al-Assad. It is the first time a Syrian official is being held responsible in court for their heinous crimes against humanity in regime-held detention facilities.

Raslan and Gharib are being tried under the principle of ‘universal jurisdiction’, where individuals can be prosecuted for serious crimes against international law. Human rights defenders and lawyers in Germany, together with Syrian survivors of torture and their families, have relied on these arrest warrants, to try to find a route to justice as Russia and China have blocked efforts at the UN to refer the situation in Syria to the International Criminal Court.

“This trial is the first occasion on which [victims] are speaking out – not only in public, but before a court – about what happened to them and what is still happening in Syria,” he said.