A rift has grown between wife of the president, Asmaa al-Assad, and the Makhlouf family, who are strong financial backers of the regime reports Al-Araby Al-Jadeed. 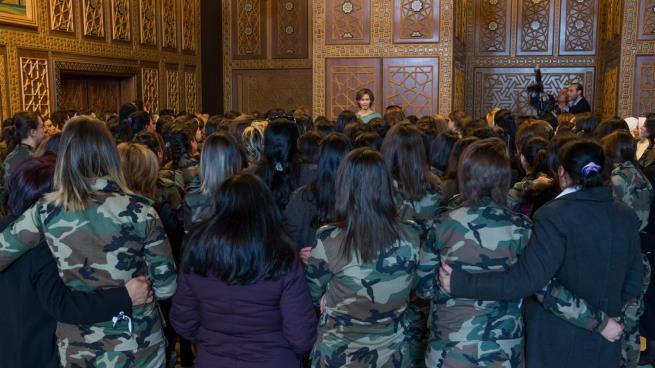 A ‘war of settling accounts’ has begun between Bashar al-Assad’s relatives that includes his uncle Mohamad Makhlouf in Russia, cousin Rami Makhlouf in Damascus and his wife Asmaa al-Assad, sources reveal.

A high-ranking source from Damascus told The New Arab on condition of anonymity that the Makhloufs were the reason behind the “scandal” of the Takamol Company belonging to Asmaa’s cousin Muhannad al-Dabbagh. The ordeal prompted Syrian Trade Minister Atef al-Naddaf to announce last week that Takamol would be banned from integrating smart cards into the distribution of bread in Syria.

The source added that the Makhloufs’ “revenge” was due to what was caused by the first lady’s intervention in dividing up Syria’s economic “cake” since her recovery from cancer last year. She put her hands on Rami Makhlouf’s investments, primarily the Bustan Charitable Society, and trusteeship on the mobile communication companies Syriatel and MTN. New managers were also appointed by Asmaa after documents and accounting books were confiscated from the Ramak area of the Damascus Free Zone.

According to sources, the “scandal” occurred when President Assad bought a 30 million dollar painting for his wife. However, the purchase came as part of a plan to “strip” Asmaa al-Assad and return the blows that she had directed to the family of Mohamad Makhlouf, reducing the family’s role in Syria’s economy. The issue reached the point of seizing some of Rami Makhlouf’s funds, for to a minor customs issue, which forced him to pay to be released from custody.

The Takamol Company gained prominence in 2016 after it signed a contract with the Assad government, through which it obtained 400 Syrian pounds per smart card it produced. The cards were approved for use in distributing fuel, sugar, rice, tea and bread.

Sources from Damascus estimate that Takamol distributed around 3 million smart cards. After the company’s first experience in distributing fuel last year in Lattakia, and then in Damascus, sources confirm that Takamol earns three Syrian pounds per liter of petrol for public vehicles, and five pounds per liter for private cars. The company earns 100 pounds every time a smart card is used to meet a family’s needs for fuel, household gas and other rationed supplies.

An assistant to a former minister in the Assad government, who asked not to be named, confirmed that the recent scandals surrounding Asmaa al-Assad came after a Russian “green light,” and came on a backdrop of the first lady “extending even to Russian stakes.”

The source revealed to The New Arab that the “billboard disgrace” occurred under Russisan auspices through Moscow’s state media, with the goal of pitting the street against Asmaa and Bashar al-Assad by exposing their luxuries while everyday Syrians suffer from poverty, especially after lockdowns imposed by coronavirus.

The Russian newspaper Gosnovosti reported that, in recent days, Bashar al-Assad bought a painting for 30 million dollars, as a gift for his wife to decorate one of the walls of her palace.

The painting is by British artist David Hockney, and is called “Splash.” It was sold at an auction in London last month to an unnamed person as an agent of Bashar al-Assad.