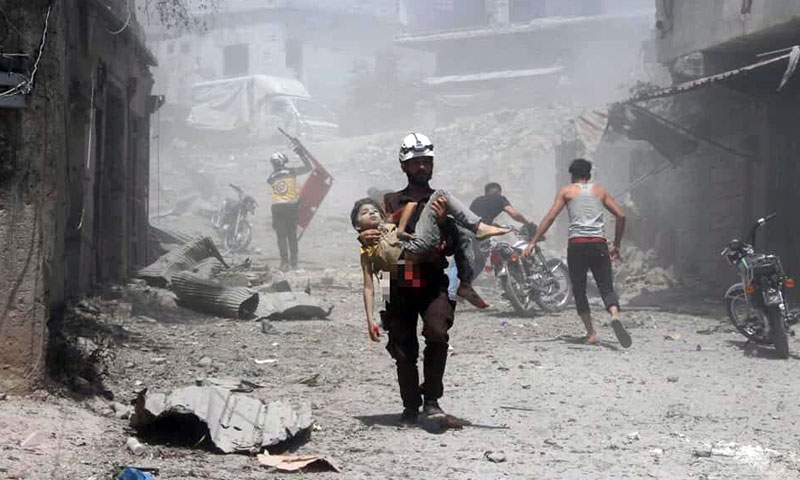 The Syrian Network for Human Rights published a report on Apr. 18, 2020, documenting the number of civilians killed and injured by Syria’s warring parties since April 2019.

The group said in its report that it had recorded 3,334 civilians killed during that period, among them 801 children and 449 women. There were 12,773 civilians injured by warring parties, who now suffer from varying health conditions.

The Syrian regime killed 1,523 civilians, including 362 children and 221 women, while Russian forces killed 567 civilians, among them 159 children and 109 women, according to the report.

The report documented 40 killings at the hands of Hay’at Tahrir a-Sham. Among them were two children and two women. The Turkestan Islamic Party killed four civilians, while the Islamic State was documented as having killed 36 civilians, including five children and three women.

According to the report, opposition factions killed 15 civilians, including seven children and one woman. The Syrian Democratic Forces (SDF) killed 119 civilians, among them 29 children and eight women. The International Coalition killed five civilians.

The group also noted 1,029 civilians killed at the hands of unnamed groups. The dead included 237 children and 105 women.

In its previous report, the Syrian Network for Human Rights documented no less than 156 cases of arbitrary arrest last month. Among those arrested were two children and one woman. Regime forces were responsible for 74 of the arrests, including the arrest of one woman. The SDF arbitrarily detained 35 people, including two children, while 38 of the arrests were at the hands of armed opposition factions. Tahrir a-Sham were behind nine of last month’s recorded arrests.